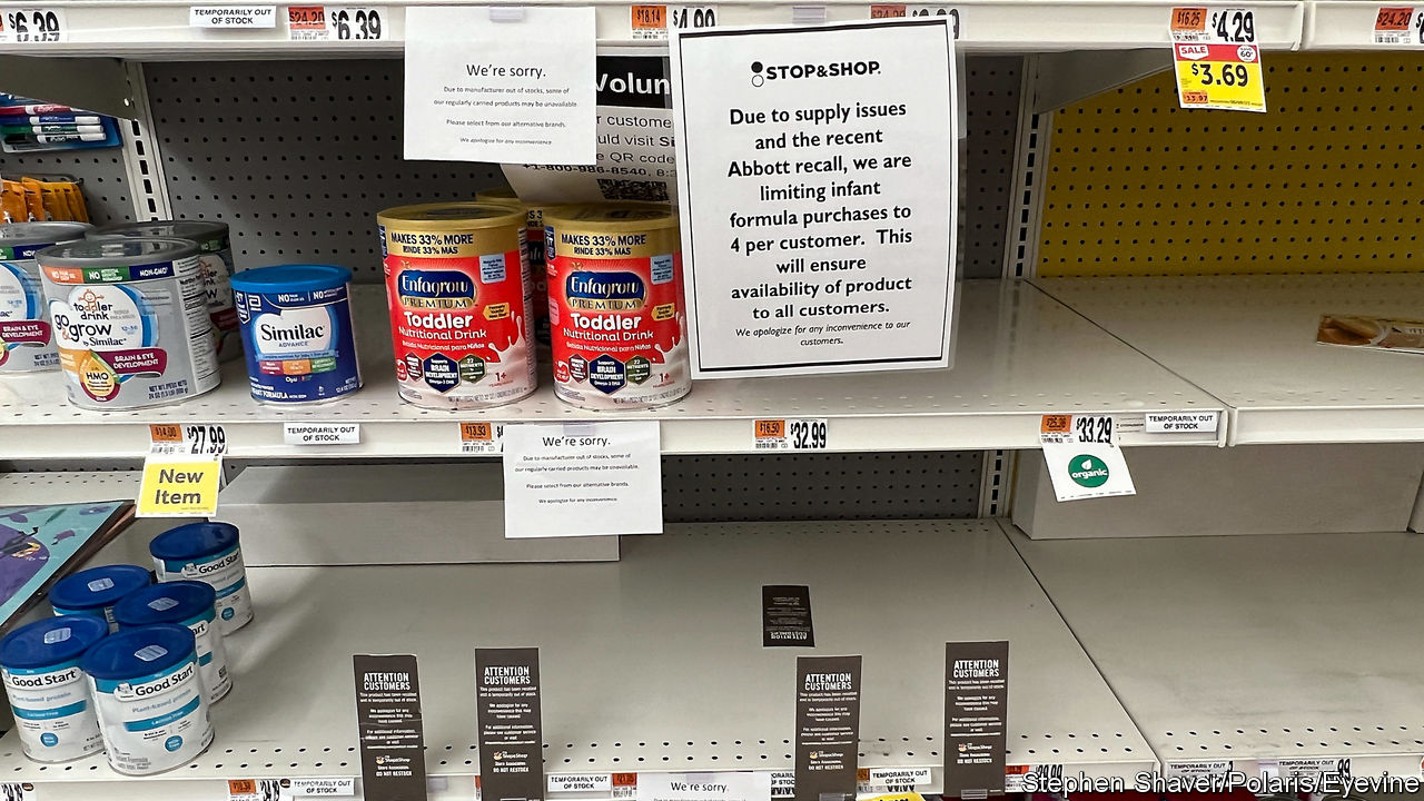 Throughout the pandemic shoppers have learned again and again about the fragility of supply chains. In America the latest product missing from supermarket shelves is infant formula. Whereas previous shortages, affecting everything from cars to couches, presented an inconvenience to consumers, a lack of nourishment for babies creates serious health risks. So the Biden administration has swung into action. On May 16th the Food and Drug Administration (fda) announced that America would loosen restrictions on imports of formula from other countries and take steps to increase domestic production. There are several overlapping explanations for the shortage. The biggest single problem has been a halt to production at a big manufacturing facility in Michigan since February, when officials began investigating bacterial infections in four babies possibly caused by its milk-based powder. Even without that, parents were struggling to buy formula. A lack of packaging materials, delays in the import of ingredients and staffing vacancies have also contributed to the headache. As much as 43% of formula products were out of stock across America in early May, according to Datasembly, a retail-data firm. Some politicians and analysts have also pointed to two more fundamental problems in the American economy supposedly exposed by the shortages: corporate concentration and price gouging. The former is a valid concern; the latter is a misleading distraction. Until shops started running out of milk-based powder for babies, most Americans probably never gave much thought to the industrial structure of the infant-formula market. Now, it is common knowledge: just four companies (Abbott, Gerber, Perrigo and Reckitt Benckiser) make nearly all of America’s baby formula. The production stoppage occurred at a factory owned by Abbott, which alone controls around 40% of the market. It is a graphic illustration of how a decrease in competition, observable in roughly three-quarters of American industries over the past three decades, can serve the economy poorly. Concentration in the formula market has been exacerbated by close regulation. About 98% of formula consumed in America is made domestically because of the fda’s stringent approval process for foreign factories. And more than half is purchased through a nutrition programme for low-income families, which in turn sources from a single supplier in each state. In 2007 when California switched its contract from Abbott to Mead Johnson (now owned by Reckitt), Abbott’s market share there fell from 90% to 5%, while Mead’s rose from 5% to 95%. On May 13th a group of Democratic Senators including Cory Booker called for an antitrust review of the formula industry. If that were to happen, it would not solve the shortages at hand, but it could put the market on sounder footing in the future. More dubious are claims about the severity of price gouging. In a letter to the Federal Trade Commission on May 12th, President Joe Biden asked it to investigate whether “unscrupulous profiteers” were scooping up infant formula in shops and reselling it for hugely marked-up prices online. There have indeed been instances of such anti-social behaviour. But for some in the Democratic Party, these allegations about pricing now fit into a broader narrative about how corporate greed lies at the root of America’s high inflation. Elizabeth Warren, a progressive senator from Massachusetts, and several colleagues introduced a bill on May 12th that would “prohibit the practice of price gouging during all abnormal market disruptions”. They cited a study from the Economic Policy Institute, a left-wing think-tank, which argued that fatter profit margins have driven more than half of price increases since 2020. Mr Biden has also cottoned on to greed as a politically clever explanation for high prices. On May 13th he tweeted that getting the wealthiest corporations to pay “their fair share” would be a way to bring down inflation. In theory the fiscal drag that would come from higher taxes without any offsetting increase in government spending could reduce inflation (as well, unfortunately, as growth more generally). But if corporate greed explains high inflation, why did so many prices only start to soar well after the pandemic began? It is not as if companies just discovered a love of profits. Jeff Bezos, the billionaire owner of Amazon, was right to criticise Mr Biden’s tweet as “misdirection”, accusing him of trying to muddy the water in the debate over prices. Indeed, something far more basic explains the run-up in inflation: a surge in stimulus-fuelled demand, compounded by the many disruptions to supply. For individual products the signal sent by higher prices is the most effective way to bring supply and demand back into balance. In the case of baby formula, it provides an incentive for domestic companies to make more in America and for foreign producers to run the gauntlet of approvals to bring their powder into the country. Rather like infant formula itself, higher prices can play a part in healthy development. ■