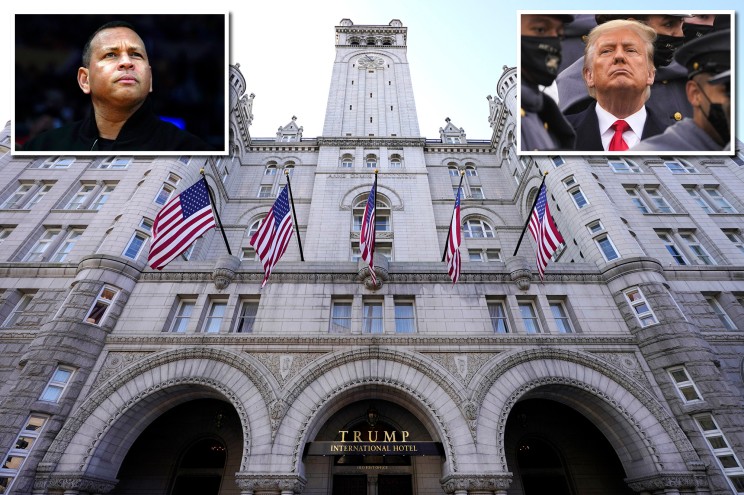 Former MLB slugger Alex Rodriguez is reportedly a key financier in the investment group angling to pay $375 million for Donald Trump’s hotel in Washington, DC — even though the former president repeatedly referred to A-Rod as a “druggie” during his playing days. Rodriguez, 46, is a general partner and key contributor with the investment fund that’s in talks to buy the hotel in a deal that could close within weeks, sources told the Associated Press. The fund is said to be led by Miami-based CGI Merchant Group. One of the sources told AP that the group buying the hotel is the Hospitality Opportunity Fund, a joint venture among CGI, Rodriguez’s A-Rod Corp. and New York-based real estate investor Adi Chugh. Rodriguez’s stake in the apparent $375 million deal to buy Trump’s hotel was not disclosed. Previous reports from last year identified CGI Merchant Group as the property’s buyer and said the firm planned to partner with Hilton to rebrand Trump’s hotel as a Waldorf Astoria outpost. Representatives for Rodriguez, the Trump Organization, CGI and Chugh’s Surya Capital did not immediately return The Post’s requests for comment on the report. While the Trump Organization owns leasing rights, the US General Services Administration owns the property and has final say over the sale. Prior to entering politics, Trump was a frequent critic of Rodriguez. A three-time American League MVP, Rodriguez had a contentious relationship with the fans and media alike and was infamously suspended for the entire 2014 MLB season for violating the league’s performance-enhancing drugs policy. As the Associated Press notes, Trump tweeted about Rodriguez several times during the thick of MLB’s performance-enhancing drug scandal. “The @Yankees should immediately stop paying A-Rod — he signed his contract without telling them he was a druggie,” Trump tweeted on April 1, 2013. The relationship between Trump and Rodriguez seemed to improve by the time the former became president. In March 2020, ABC News reported that Trump called Rodriguez to get his advice on how to respond to the COVID-19 pandemic. But Trump’s newfound respect for A-Rod’s opinion didn’t stop the ex-Yankees slugger from endorsing Joe Biden for president ahead of the 2020 election. If finalized, the sale price could help Trump’s company recoup its losses on the hotel property. The Trump Organization has sought to sell its rights to the hotel since 2019. The Trump Organization spent more than $200 million renovating the 263-room hotel, which is located in the Old Post Office building in Washington, DC, and reopened to the public in 2016, shortly before Trump took office. The House Committee on Oversight and Reform, a Democrat-led panel probing potential conflicts of interest during Trump’s presidency, said last year that the Trump Organization lost more than $70 million on the property during his term in office. The transaction would represent another major deal for Rodriguez, who has reinvented himself as a businessman and investor in retirement. After being involved in a failed bid to buy the New York Mets in 2020, Rodriguez was part of a group that acquired a minority stake in the NBA’s Minnesota Timberwolves last year. The deal granted Rodriguez’s group the right to acquire a controlling stake by 2023. Aside from his investments in sports, real estate, art and other sectors, Rodriguez has worked as an MLB analyst for ESPN and Fox Sports.