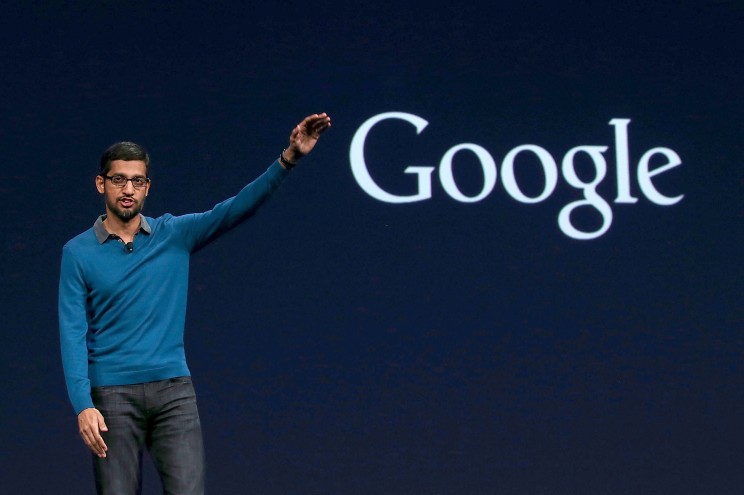 Google parent Alphabet Inc beat fourth-quarter sales expectations on Tuesday as the search giant’s internet advertising, cloud computing and hardware businesses benefited from holiday shopping, sending shares up more than 7% in after-hours trading. The results were the latest to signal that the global trend toward a more digital economy has made Big Tech companies resistant to small-market shocks. While concerns about rising inflation, COVID-19 variants and supply-chain shortages have rattled Wall Street and affected sales at some businesses, the companies that control key gateways to the Web have not seen a dip since the early days of the pandemic. Alphabet’s overall quarterly sales jumped 32% to $75.3 billion, above the average estimate of $72 billion among financial analysts tracked by Refinitiv. Total Google revenue was $74.9 billion, above estimates of $71.652 billion. Shares of Alphabet rose 7% during after-hours trading to $2,948. The company also announced a 20-for-one stock split, in which shareholders as of July 1 this year will receive a dividend of 19 additional shares. Shareholders must approve the split. Alphabet Chief Financial Officer Ruth Porat told CNBC that the company aimed to make shares accessible to more traders. The company’s third-straight quarter of record sales reflects the growth of ad-laden Google services such as internet search, email and YouTube video streaming, since the pandemic made hybrid work and e-commerce customary across much of the world. Google generates more revenue from internet ads than any other company. Google had said that during the third quarter it lost some sales because companies running low on product trimmed marketing and new iPhone privacy measures curtailed its ability to track users online. In the fourth quarter, advertising revenue rose 32.5% to $61.2 billion, compared with the average estimate of $57.1 billion. Top rival Meta, owner of Facebook, reports financial results on Wednesday. Shares of Meta, Twitter and Snap Inc all rose after Alphabet released its results. Others including Amazon and ByteDance’s TikTok have been taking small pieces of Google’s share of the global advertising market. Though market forecasters expect the trend to continue over the next few years, they do not expect major slippage in Google’s leading position. Google’s secondary businesses, including Cloud, also have been lifting overall sales. Google Cloud, which trails Amazon and Microsoft in cloud services market share, increased revenue by 45% to $5.5 billion, above estimates of $5.4 billion. Alphabet also reported a quarterly sales record during the holiday season for its Google Pixel smartphones despite supply constraints. Alphabet’s quarterly profit was $20.6 billion or $30.69 per share, beating expectations of $27.56 per share and marking a fourth-straight quarter of record profit. Alphabet’s profit benefits from unrealized gains from its investments in startups, and the company also got a $2 billion boost last year from extending the useful life of its servers and networking gear. For all of 2021, Alphabet increased profit by 89% to $76 billion. Sales rose 41% compared with 2020, when sales grew just 13%, or the slowest in over a decade, because of advertisers slashing spending in the first few weeks of the pandemic. Alphabet’s total costs in 2021 increased 27% to $178.9 billion as the company began to resume its pre-pandemic pace of hiring and construction. Programming licenses for YouTube and data center expansion also have led to ballooning costs. Alphabet increased its cash hoard by nearly $3 billion in 2021 to $139.6 billion. Alphabet shares have gained 43% over the past 12 months and have shed nearly 7% year-to-date as of early Tuesday – both bigger swings than the market at large as rising inflation and geopolitical concerns have made big stocks fall out of favor. Numerous lawsuits accusing Google of anticompetitive conduct in the advertising and mobile app store markets continue to be one of the biggest challenges facing the company. Google already has said its efforts to lower Play app store fees to assuage some of the concerns will hurt revenue.