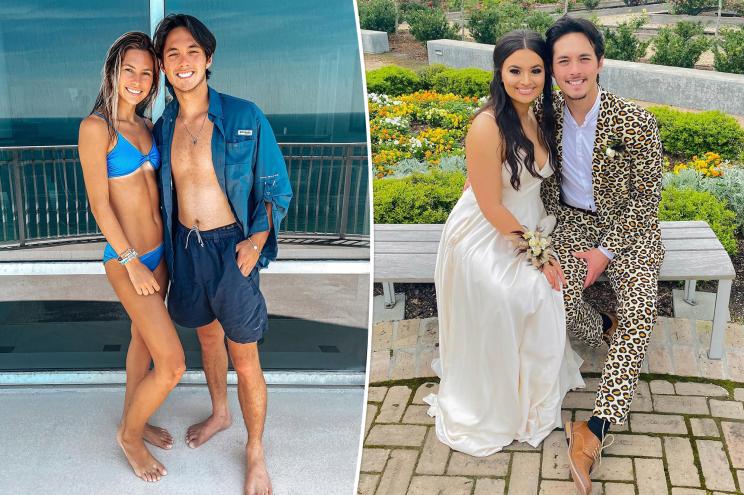 From the stage to the slammer. “American Idol” winner Laine Hardy was behind bars Friday after being charged with planting a listening device in his ex-girlfriend’s living quarters at Louisiana State University. The country crooner, 21, was taken into custody after his former flame found the voice recorder at her campus accommodation this month. The female student is not named in the booking document released Friday by the 19th Judicial District Court in East Baton Rouge — but the report does state that she dated Hardy between November 2021 and February 2022. The “Memorize You” singer has been notoriously private about his personal life and did not debut a girlfriend during those dates. The singing sensation has kept tight-lipped about his dating life since winning “American Idol” back in 2019. However, he has been linked to two different women during that time period. see also Hardy appears to have had a two-year on-off again romance with high school grad Gracie Lee, 19, before it officially ended last summer. Meanwhile, in 2020, local outlets claimed the crooner was connected to LSU student and pageant queen, Sydney Taylor, 20. The pair both contracted COVID-19 after being snapped canoodling with one another. Neither Taylor nor Lee are believed to be connected to the current criminal case. The Post has contacted both women — and Hardy — for comment. Gracie Lee seems to have been Hardy’s longest love, with the pair appearing to date on and off for two years. In June of last year, Hardy took to Instagram sharing a series of photos with the brunette, implying that they were back together after a brief hiatus. “Just wanted to say I’m very thankful for this woman right here,” the “Memorize You” singer captioned his post, without explicitly calling her his girlfriend. “She’s a keeper Laine, don’t let her go again. If you do, it will be a major loss you’ll never regain,” one fan — who had seemingly followed their relationship — warned. Meanwhile, Lee’s page features several photos with Hardy, stretching back to 2019. In November of that year — just six months after Hardy took home the “American Idol” title — she posted a couple snap with the caption: “My honey.” Three months later, on February 14, she shared a Valentine’s Day tribute declaring she was in love with the singer. Meanwhile, Hardy appears in a number of Lee’s other snaps, before she stopped sharing photos of him last summer. “Are they still together? There are no posts recently of them together so I am wondering?” one concerned fan publicly posted after the couple shots dried up. Meanwhile, it appears Hardy enjoyed a fling with stunning Sydney Taylor in the summer of 2020 — while seemingly on a break with Lee. A giddy Hardy took to his public Facebook on June 21, 2020, sharing a photo that showed him cozied up with the leggy blonde — who was crowned Miss Teen Louisiana 2020. Later that same day, he returned to Facebook to announce that he contracted COVID-19. Two days later, Taylor — who studies mass communications at LSU — announced that she, too, had come down with the virus. An article in The Advocate at the time described Taylor as Hardy’s “girlfriend.” It’s unclear when they split, but she now appears to be dating LSU baseball star, Trey Shaffer. On Friday morning, Hardy was taken into custody after being charged with leaving the listening device in his unnamed ex’s residence. LSU spokesman Ernie Ballard told The Post in a statement: “Laine Reed Hardy (Non-LSU student) was arrested by LSU Police today and booked into East Baton Rouge Parish Prison for violation of 15:1303 — Interception and Disclosure of Wire, Electronic, or Oral Communication. His arrest warrant has been filed with clerk of court.” The singer is charged with leaving a listening device at his ex-girlfriend’s campus accommodation at Azalea Hall in order “to monitor her conversations” when they broke up, after dating from November 2021 through February 2022. According to prison booking documents, “the victim advised that last night, while watching a movie with her roommate, [they] located a device, appearing to be a phone charger under the victim’s futon.” After googling the device, “she learned it to be a VR-500 Voice Activated Recorder.” Hardy did not respond to The Post’s requests for comment before surrendering to authorities this morning — but he did speak to his 737,000 followers on Facebook last night, saying the LSUPD issued “a warrant due to allegations made against me.” He did not specify what he was accused of but noted he was “fully cooperative” with cops as more than 12,000 of his fans posted reactions and messages of support. Hardy’s booking document goes on to state that in mid-February, “the victim … found a fake Instagram on the Defendant’s phone that he used to cover up that he was illegally recording her when he was not around.” The docs also points out that Hardy “had information about the victim and her actions during Christmas break that was not known to the defendant.” When the female student “confronted” Hardy he “admitted that he left a ‘bug’ in her room later discarded it in his pond,” according to the report. After the victim discovered the device still in her room — she turned it over to LSUPD, at which time the authorities found audio of his “distinguishable voice” and heard his name being repeated by other parties. On the second to last recording, dated Feb. 2, the “victim is heard telling someone about how she figured out the Defendant was recording her” — but she “doesn’t know if the bug is still in her room.” When contacted for comment about the charges, Hardy’s reps told The Post they could not comment on the “pending investigation.” However, his attorney C. Frank Holthaus confirmed that “Mr. Hardy did receive a warrant for his arrest [Thursday] and has been and will continue to be completely cooperative with the Baton Rouge Police Department on this matter. Due to the public nature of Mr. Hardy’s profession, we ask for privacy at this time.”