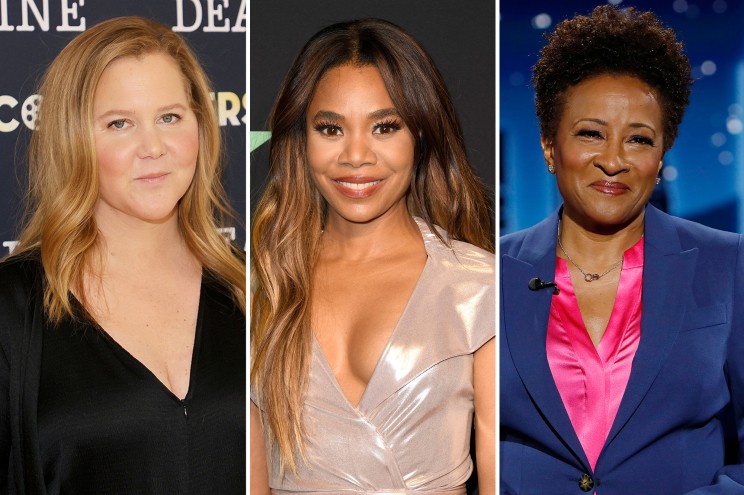 The 2022 Oscars ceremony is taking shape. Amy Schumer, Regina Hall and Wanda Sykes are reportedly finalizing details to host the Academy Awards on March 27, according to Variety. The telecast’s producer, Will Packer, has been taking meetings for weeks to find the perfect stars to host the big event. Insiders also revealed that “Mad Men” star Jon Hamm was considered at one point, but has exited the conversation. The “Girls Trip” producer has been playing with the idea to make the ceremony consist of three acts. Each hour would feature a different pair of hosts. The official list of hosts will be announced on “Good Morning America” on Tuesday. Schumer, 40, teased that she has “big fun news comin” on Instagram Sunday. Her post could be a subtle clue regarding her host candidacy. The evening will be held at Los Angeles’ Dolby Theatre, and attendees will not be required to show proof of vaccinations. They will just need to present a negative PCR test or a negative rapid antigen test. It’s quite a difference from this year’s SAG Awards and Critics Choice Awards ceremonies, as both shows will require full vaccination status. This year marks the first time that the Oscars will get a host, or hosts, after three years of MC-less awards. The ceremony was last hosted by Jimmy Kimmel in 2018. Seth Rogen recently bashed the Oscars and claimed that people “don’t care” about the ceremony anymore. The comedian, 39, shared his thoughts about the coveted awards in an interview with Insider. “I don’t get why movie people care so much if other people care what awards we give ourselves,” Rogen said. “To me, maybe people just don’t care,” the “Pam & Tommy” star added. “I don’t care who wins the automobile awards. No other industry expects everyone to care about what awards they shower upon themselves. Maybe people just don’t care. Maybe they did for a while and they stopped caring. And why should they?” The 94th Academy Awards will air live on March 27 at 8 p.m. Eastern on ABC.