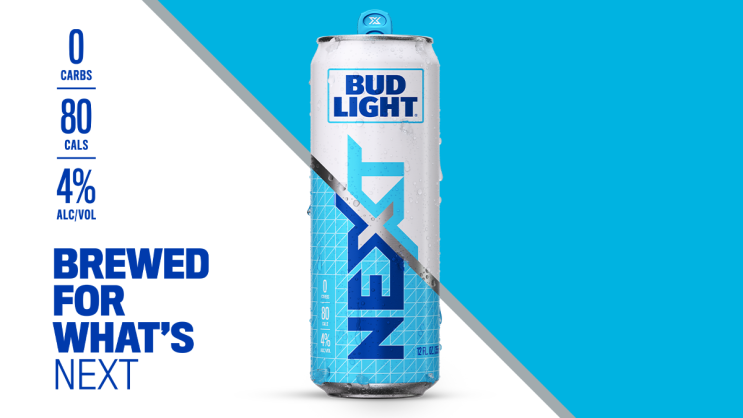 Anheuser-Busch is rolling out its first-ever beer that contains zero carbohydrates as it looks to cater to a new, more body-conscious generation of beer drinkers. Bud Light Next, slated to hit shelves Feb. 7, is aimed at Gen Zers who are looking for a drink that’s light and carb-free like hard seltzer but which also has the flavor of beer, the company said. The new beer, first announced last summer, will get a push from an in-game Super Bowl commercial that will “demonstrate what’s possible when there’s zero in the way,” the company says. Bud Light NEXT has 80 calories per 12-ounce serving and 4% alcohol — 30 fewer calories than Bud Light and 0.2% less alcohol by volume. But the biggest difference is in the carbs — Bud Light has 6.6 grams per serving, while Bud Light Next has none. By comparison, a 12-ounce serving of Budweiser contains 145 calories and 11 grams of carbohydrates. Its alcohol-by-volume is 5%. Paul Scholz, Bud Light’s senior director of innovation, said the zero-carb beer will be geared toward health-conscious millennials between the ages of 21 and 27 — a demographic that has shown a greater preference toward drinks with reduced alcoholic content. Scholz told The Post that it took the company 10 years and more than 130 different prototypes before it finally came upon its new offering. It will be sold in both bottles and cans, in six-packs and 12-packs. “It’s been a long time in the making,” Scholz said. “We’ve tried to strike this balance of achieving zero carbs but with a flavor profile that we’re really proud of that brings that light refreshing taste of a light lager with it.” Bud Light NEXT will be among the drinks vying for a share of the craft market that now includes newcomers like the no-alcohol Athletic Brewing Co., Heineken’s Lagunitas, the Vermont-based Zero Gravity, and Woodland Farms Brewery in Maine. Legacy beer-makers have also been pushed into the non-alcoholic space, including Anheuser-Busch, which rolled out Budweiser Zero and low-calorie Michelob Ultra. Heineken and Samuel Adams have also introduced their own versions of non-alcoholic beers – the Heineken 0.0 malt drink and Samuel Adams’ Just The Haze. Earlier this month, NFL legend Troy Aikman announced the roll-out of his own brand of lager, Eight, which offers 90 calories per serving and uses strictly organic grains. “Today’s consumers are all about breaking barriers, being trailblazers and setting their own path,” Andy Goeler, Bud Light’s vice president of marketing, said. “We are proud to introduce this new super crisp beer which is brewed to meet their evolving taste preferences.”