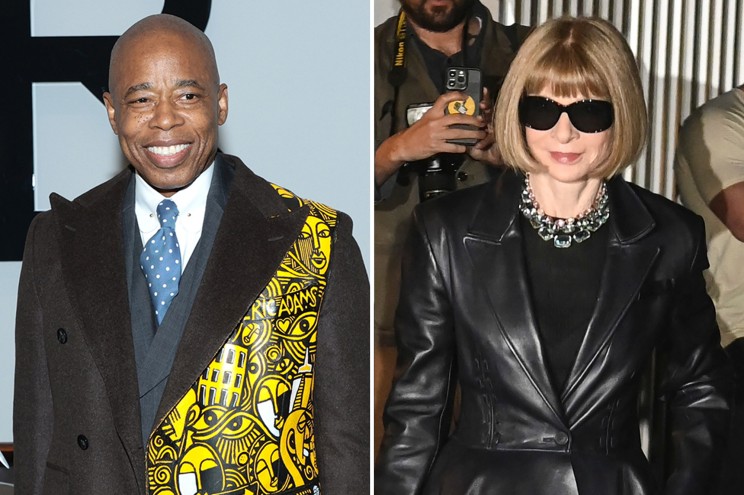 New York City Mayor Eric Adams showed off his passion for fashion at the Museum of Modern Art on Tuesday. The politician, 61, stepped out for Ralph Lauren’s first in-person fashion show since the start of the pandemic in the Big Apple. He was joined by none other than Vogue editor Anna Wintour, and the Polo fashion designer himself. Adams showed off his eclectic style on Instagram, writing: “Strike a pose! Incredible night at the @themuseumofmodernart to celebrate the groundbreaking work of @RalphLauren and to send a clear message: #NYCisBack!” The retired NYPD officer shared a gallery of snaps from the evening’s festivities, including one where he posed with Wintour, 72, models rocking Manhattan streetwear and a shot of himself wearing a yellow city-inspired blazer. Stars such as Lily Collins, Rachel Brosnahan and Jessica Chastain were in the show’s attendance. Legendary models Gigi and Bella Hadid, Shalom Harlow and Tyson Beckford took on the runway. Last week, Lauren, 82, released a limited-edition collection from his Polo line for a collaboration with two historically African-American universities: Morehouse College and Spelman College. An “old money” aesthetic inspired the clothes, and the garb consisted of dresses, varsity jackets, logo sweaters and suits. The collection was modeled by a slew of all-black students. The idea was conceived by Ralph Lauren’s Director of Concept Design & Special Projects James Jeter, who graduated from Morehouse in 2013, and Dara Douglas, the brand’s Director of Inspirational Content. Douglas graduated from Spellman in 2003. On March 16, the brand announced the collab and shared shots from the campaign. “Designed, directed, and curated by alumni rom @Morehouse1867 and @Spelman_College at Ralph Lauren, we revisit a legacy of American collegiate style. In close partnership with both institutions, we are opening the aperture of our inspiration and storytelling to include the esteemed network of historically Black colleges and universities that have an essential role in the American dream,” the company said on Instagram. They continued, “Celebrating their distinguished sartorial traditions and history, and rooted in the personal style of Morehouse men and Spelmanites from the 1920s to the 1950s, the collection expands the collegiate sensibility that is intrinsic to our brand identity.” In a statement regarding the partnership, Lauren noted: “Our portrait of American style and our vision of the American dream would be incomplete without Black experiences like these.” “I have always believed in the American dream. That is why I consider it our greatest responsibility to understand, be inspired by, and aspire to the dreams of all those who call this country home – and to share them with the world.”