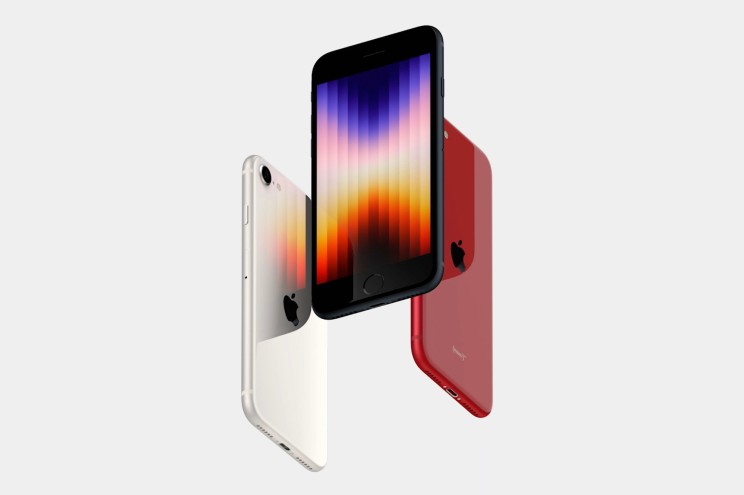 Apple revealed new iPhone, iPad and Mac models on Tuesday during its first major event of 2022. The new version of the lower-cost iPhone SE, which comes with a smaller display than Apple’s higher-end iPhone 13, will feature 5G capabilities, a more powerful chip called the A15 and better battery life, the company said. The new iPhone SE will start at $429 and be available starting on March 18, representing a $30 price bump from the current version of the iPhone SE, which was introduced in 2020. During the online stream, called “Peek Performance,” CEO Tim Cook also introduced a new version of the iPad Air featuring a more powerful chip and an upgraded camera with new FaceTime features. The new iPad Air will start at $699 and also be available starting March 18. Apple said the device is “two times faster than a Windows laptop in its price range.” In addition, Apple revealed a new Mac desktop computer called the Mac Studio, which it pitched as a higher-end alternative for its current offerings like the iMac and Mac Mini. The Mac Studio features Apple’s M1 Max chip and is pitched at creatives who need massive processing power for activities like film and music production. The base version of Mac Studio will retail for $1,999, while a more powerful version that features a processor called M1 Ultra will sell for $3,999, Apple said. The company also announced a high-end computer monitor called the Studio Display, which features an iPhone-quality camera and speakers that support Apple’s “spatial audio” stereo feature. The monitor, which will sell for $1,599, contains an A13 chip, which is also used in some iPhone models. Both the Mac Studio and the Studio Display will be available starting March 18. The new iPhone SE, which hasn’t been upgraded since 2020, is expected to sell well internationally due to its lower price point in comparison to the iPhone 13, Wedbush Securities managing director Dan Ives told The Post. Ives added that Apple’s “compelling” announcements on Tuesday show the company’s strength during a supply chain crisis that has left everyone from Chevrolet to Sony scrambling for chips. “Launching a new product along with iPads in the biggest supply chain shortage in modern history speaks to Apple’s distribution muscles that are unmatched,” Ives said. “They are beating chip companies like Intel at their own game.” Apple also announced an exclusive streaming partnership with Major League Baseball and is also expected introduce a new Mac computer later during the ongoing event. Apple is expected to make several high-profile announcements later this year. That includes other new Mac models within the next three to five months as well as the debut of an Apple augmented or virtual reality headset, Ives predicts.