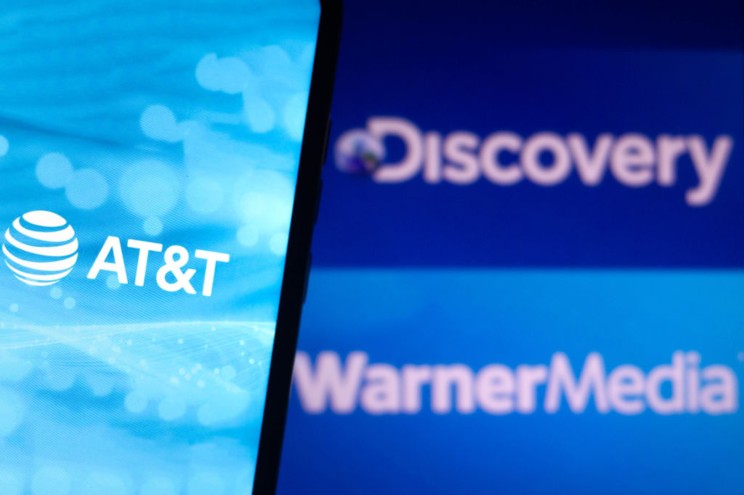 AT&T said Tuesday that it will spin off WarnerMedia, home to HBO and CNN, in a $43 billion deal to merge the property with Discovery, which owns Food Network, TLC and Animal Planet. The telecom giant also cut its dividend by nearly half, sending shares down over 6 percent in pre-market trading. As part of the deal, AT&T shareholders will own 71% of the new company, dubbed “Warner Bros. Discover.” They will also receive 0.24 shares of Warner Bros. Discovery for each AT&T share they own. AT&T will have 7.2 billion diluted shares outstanding after the transaction closes. AT&T said it will pay a dividend of $1.11 a share, down from $2.08 per share. This is at the lower end of an $8 billion to $9 billion range AT&T had forecast earlier. The deal to unwind AT&T’s $85 billion purchase of Time Warner, renamed WarnerMedia, was announced early last year, but some financial details were not disclosed until Tuesday. AT&T is in the process of shedding non-core media assets so that it can focus on its wireless and broadband internet business as it forges ahead with the development of 5G technology. “Rather than try to account for market volatility in the near-term and decide where to apportion value in the process of doing an exchange of shares, the spin-off distribution will let the market do what markets do best,” AT&T CEO John Stankey said in a statement Tuesday. “We are confident both equities will soon be valued on the solid fundamentals and attractive prospects they represent.” In addition to allowing AT&T invest roughly $20 billion this year on primarily 5G technology, the deal helps the company reduce its heavy debt load, which as of the fourth quarter totaled $156.2 billion. The newly formed Warner Bros. Discovery, which is helmed by Discovery CEO David Zaslav, has a steep climb as it races to catch up to larger streaming rivals like Netflix and Disney. Although HBO Max ended the fourth quarter with 74 million subscribers, it still trails top streamer Netflix, which has 202 million total subscribers, and Disney’s marquee service Disney+, which has over 118 million subscribers, as of the fourth quarter of last year. The Mouse House is set to give updates on its streaming numbers next week when it reports first-quarter earnings.