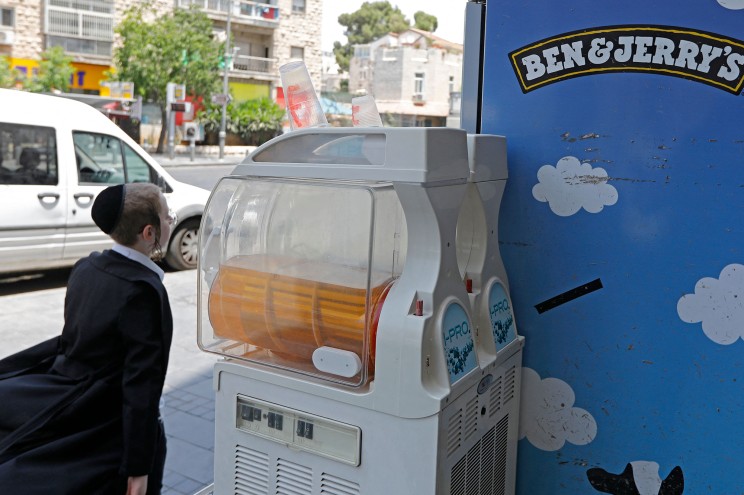 Ben & Jerry’s will work to find a “new arrangement” this year for selling its ice cream in Israel after the Vermont-based company announced it would no longer sell its products in the occupied Palestinian territories, its corporate parent said Thursday. “Our absolute focus right now is to figure out what the new arrangement will be for Ben & Jerry’s,” Unilever CEO Alan Jope told Reuters. It was the first time Jope addressed his subsidiary’s future plans for Israel since the controversial boycott of Jewish settlements was announced in July. Ben & Jerry’s announcement sparked a backlash, with several states, including New York and New Jersey, pulling their investments from Unilever in protest. Jope, who said last year that Unilever could not interfere with the decision made by Ben & Jerry’s autonomous board, indirectly criticized the ice cream maker Thursday. “On subjects where Unilever brands don’t have the expertise or credibility, we think it’s best that they stay out of the debate,” he said. “Ben & Jerry’s is a great brand — most of the time they get it right — they have a great track record of campaigning on important issues that are relevant to their consumers.” Ben & Jerry’s accounts for about 3% of the world’s ice cream market. The brand’s sales grew 9% last year, Unilever said, outpacing overall underlying sales growth of 4.5%. The company did not give further details on sales. “I definitely would not make a connection between those (Ben & Jerry’s) statements and its sales growth,” Jope said. “The growth that we’re seeing on Ben & Jerry’s is driven much more by their innovation program,” Jope added. The Ben & Jerry’s controversy didn’t appear to negatively affect the parent company’s bottom line. Unilever on Thursday released its fourth-quarter earnings, which showed a 4.9% increase in sales. The figure beat analysts’ expectations as the growth forecast was at 3.8%. In 2021, Unilever reported an increase in sales of 4.5% — the best result in nine years.