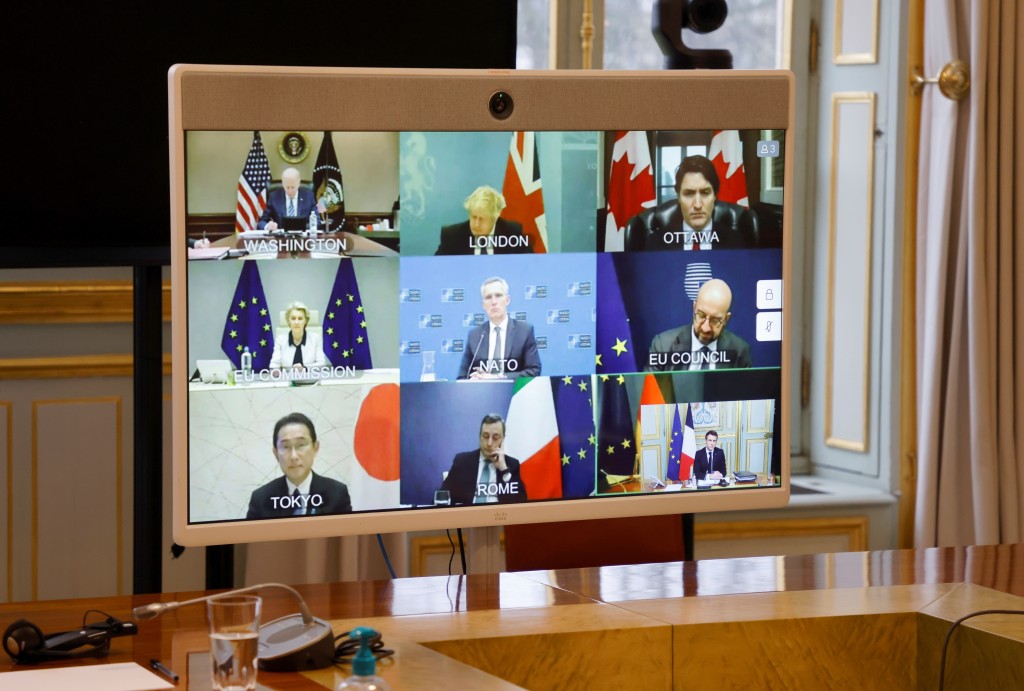 President Biden was set to announce new sanctions on Russia Thursday after Russian President Vladimir Putin launched a massive overnight invasion of Ukraine — while some congressional Republicans claimed Biden’s “weak” leadership helped cause the war. Biden’s remarks, initially scheduled for 12:30 p.m. but later pushed back to 1:30 p.m., will take place following a phone call that lasted more than an hour between Biden and other leaders of the G7 group of nations to discuss the precise punishments that will be laid on Moscow’s government and economy. Following the call, British Prime Minister Boris Johnson announced a fresh package of UK sanctions in the House of Commons that include freezing the British assets of all major Russian banks, barring Russian companies and the Russian government from raising money on U.K. markets, and prohibiting Russian flagship airline Aeroflot from landing at British airports. However, Johnson indicated that the G7 nations were unable to come to an agreement on kicking Russia out of the SWIFT international payment system that is used to assist transactions on global banks. Ukrainian officials, led by Foreign Minister Dmytro Kuleba, had begged for the West to take such a drastic step. “I will not be diplomatic on this,” Kuleba tweeted Thursday morning. “Everyone who now doubts whether Russia should be banned from SWIFT has to understand that the blood of innocent Ukrainian men, women and children will be on their hands too. BAN RUSSIA FROM SWIFT.” Putin said in a speech broadcast early Thursday local time that he had ordered operations to “demilitarize” Ukraine after recognizing as independent two pro-Russia separatist self-declared republics in eastern Ukraine. Footage posted on social media showed explosions and military aircraft operating across Ukraine, as well as destroyed buildings and military vehicles along roadways. Biden had warned for weeks that Russia planned to invade Ukraine and threatened to levy “the most severe sanctions that have ever been imposed” during a Feb. 7 news conference with German Chancellor Olaf Scholz. But Republicans on Thursday slammed Biden for failing to deter Putin, including with an initial “tranche” of limited sanctions Tuesday after Russia deployed troops into the rebel-held areas of Donetsk and Luhansk oblasts within Ukraine’s borders. Rep. Elise Stefanik (R-NY), the third-ranking House Republican, blasted Biden as “unfit” to lead the free world. “After just one year of a weak, feckless, and unfit President of the United States and Commander-in-Chief, the world is less safe. Rather than peace through strength, we are witnessing Joe Biden’s foreign policy of war through weakness,” Stefanik said. Rep. Mike Johnson (R-La.) said, “From impeding American energy production, to greenlighting Russian energy production, to dragging their feet on sanctions, to lobbying against legislation to hold Russia accountable, it is clear that the Biden Administration’s appeasement approach towards Russian aggression has failed.” Sen. Lindsey Graham (R-SC) said in a Fox News interview that he and Democratic colleagues planned to introduce legislation against Putin to seize assets that “he has stolen from the Russian people.” “We need to have an economic embargo of basically all thing Russia. I hate it for the Russian people, but why should we be traveling to Moscow freely and openly?” Graham said. Graham later alleged that Biden “miscalculated” Putin. “They thought if they laid low and created some mystery about what they would do, that would deter Putin. Well, when you’re weak, you don’t have the luxury of being mysterious or nuanced,” Graham said. “Now a strong person like [former President Donald] Trump could say things like, ‘Well, if you screw with me, all bets are off.’ That would actually chill people out because they believe he’s strong, but when you’re weak, you don’t have the ability to be nuanced. So the fatal mistake here was not to let Putin and his cronies know what would happen to the Russian economy and them as individuals. The strategy didn’t work.” Several lawmakers expressed concern about China possibly taking similar action against Taiwan, which has had its own US-protected government since the end of the Chinese civil war in 1949. Putin’s invasion of Ukraine “potentially emboldens other authoritarian powers to follow its path,” said Sen. Bill Hagerty (R-Tenn.), a former US ambassador to Japan. “In particular, [Chinese President] Xi Jinping and the Chinese Communist Party, with their sights set on Taiwan, are closely watching what happens.” The initial sanctions announced by Biden Tuesday targeted two Russian state-owned banks, a handful of Russian elites and barred the trading of Russia’s sovereign debt on US finance markets. After Putin recognized the separatist Donetsk and Luhansk governments on Monday, Biden barred Americans from investing in those war-torn areas, though there was likely very little US investment in the region anyway. Biden on Wednesday imposed sanctions against the company that built the Nord Stream 2 natural gas pipeline, which Germany’s government this week said would not be allowed to open due to Putin’s moves into Ukraine. Biden faced withering Republican criticism last year for waiving sanctions against the Baltic Sea project, which would have piped fuel directly to Germany, bypassing Ukraine. The war in Ukraine broke out after Putin on Monday delivered a rambling address describing parts of Ukraine as “ancient Russian lands” before recognizing as independent countries the pro-Russia rebel states in Donetsk and Luhansk. The Donetsk and Luhansk separatists began fighting against Ukraine’s central government in 2014 when Biden was vice president. The Kremlin-backed rebellion followed Russia’s annexation of Crimea after a popular uprising ousted Ukraine’s pro-Russian President Viktor Yanukovych. Biden horrified Ukrainians last month when he said at his second solo White House press conference that a “minor incursion” by Russia might result in less-severe penalties due to disagreement among NATO allies. Ukrainian President Volodymyr Zelensky reprimanded Biden for the remark, while one Ukrainian official suggested the American president might have given Putin a “green light” to invade.