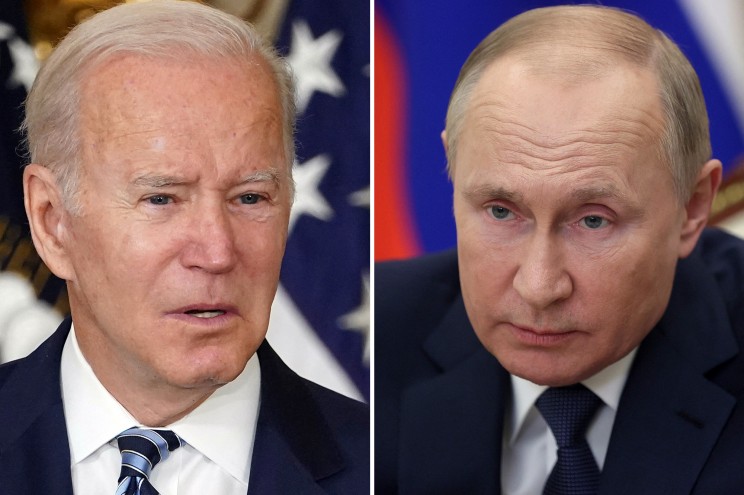 President Biden’s high-stakes phone call with Russian President Vladimir Putin got underway Saturday morning as tensions over Ukraine reached a fever pitch. The conversation, arranged hastily on Friday, came at what Secretary of State Antony Blinken called “a pivotal moment” of diplomacy as Russia continued to mass more than 130,000 troops and heavy military equipment along its border with Ukraine. “So far, we’ve only seen escalation from Moscow,” Blinken said Saturday after speaking with Russian Foreign Minister Sergei Lavrov. “This is a pivotal moment. We’re prepared for whatever should happen.” Biden was secluded at Camp David, the presidential retreat in the Maryland mountains, for the call, his first direct conversation with Putin since December. They spoke soon after Putin wrapped up a lengthy conversation with French President Emmanuel Macron in which the two discussed “the conditions for security and stability in Europe,” the Élysée Palace said Saturday. Earlier Saturday, the US and its Western allies began to evacuate their embassies in Kyiv. A small core of American diplomats would remain in Ukraine, the State Department said — but would relocate to the city of Lviv in western Ukraine, where they could be more easily evacuated if a Russian invasion begins. About 150 American military trainers, members of the Florida National Guard who have been in Ukraine to help its forces prepare for a potential invasion, are being pulled from the country, the Pentagon announced Saturday. Russia has repeatedly denied any intent to invade Ukraine, despite its months-long buildup of troops along their shared border. But US intelligence officials have reportedly concluded that Putin has given the order to attack its neighbor within days. Meanwhile, thousands of Ukrainians rallied in Kyiv Saturday in a show of national unity, with demonstrators chanting “Glory to Ukraine” and waving flags and banners — including one that read “Invaders must die.”