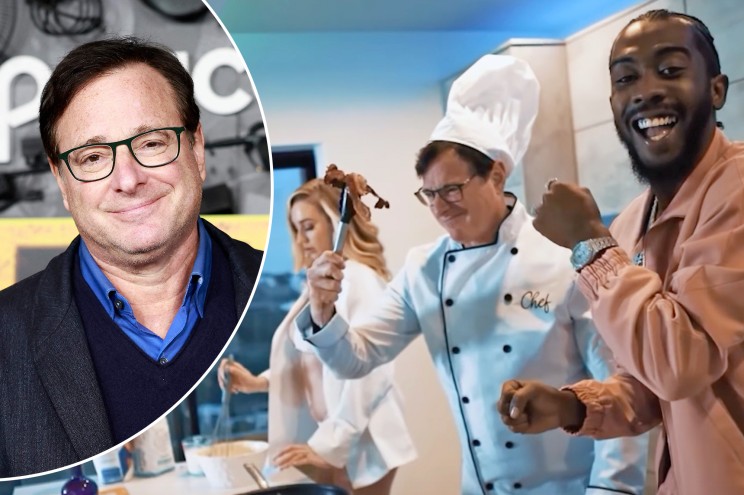 Bob Saget’s untimely death last month at the age of 65 shocked fans around the world. However, the “Full House” alum filmed one more project before he passed: a rap video. Saget starred in a music video for rapper Desiigner’s new single “Bakin’.” The song features singers Slushii & DJ Whoo Kid and dropped on Friday. The video first opens with Snoop Dogg suggesting that Desiigner, 24, should “get Bob on the job.” Saget then comes in blazing and starts cooking up bacon, catching money and dancing to the music alongside adult film star Kendra Sunderland. The video, which contains some language not suitable for kids, includes a special tribute at the end of the video for the late actor. DJ Whoo Kid discussed the comedian’s presence on set with Rolling Stone. “We needed a chef for the video and I remember thinking, ‘Who the f – – k is gonna be the chef who can make it weird?’” the producer said, adding that he also inquired Willie Nelson to be in the video. However, Nelson was unavailable at the time of filming. The G-Unit Records man added, “Then immediately I thought ‘Bob Saget!’ Nobody on set believed me when I said he’d come until he actually drove up and rang the bell, like this was a ‘Full House’ episode. When you have rappers pull up for videos, they bring a Maybach, or rent a Lambo, they show off. He shows up and parks his Lexus on the grass and comes in looking like a dad.” “He kept calling it a rap video; I don’t even say ‘rap’ anymore,” Whoo Kid quipped. “You could tell he was old-school. He wouldn’t even say ‘twerk,’ he would ask if there was going to be a lot of booty-shaking. But we didn’t do that for him; I knew he’s got a wife and everything, I told him all I wanted him to do was cook.” Former “Saturday Night Live” cast member Jay Pharaoh also stars in the video. The funnyman spoke to the music publication as well and chimed in, “It’s so funny because this video is a testament to what Bob Saget was on stage. He was the item of incongruity. He would go up there and he would say all of this outlandish s – – t, and people wouldn’t expect him to say it. The fact that it was so extreme and it was coming from America’s favorite dad, it messed people up. It’s the same thing in this video.” Desiigner added, “‘Full House,’ Nick at Nite, Bob Saget used to rock me to sleep at night man. It was a starstruck moment for me seeing him bumping to my music. After he passed away, it was different seeing that now that he’s back with the universe. We want to turn this up for Bob, you could say this is a going home party for him.”