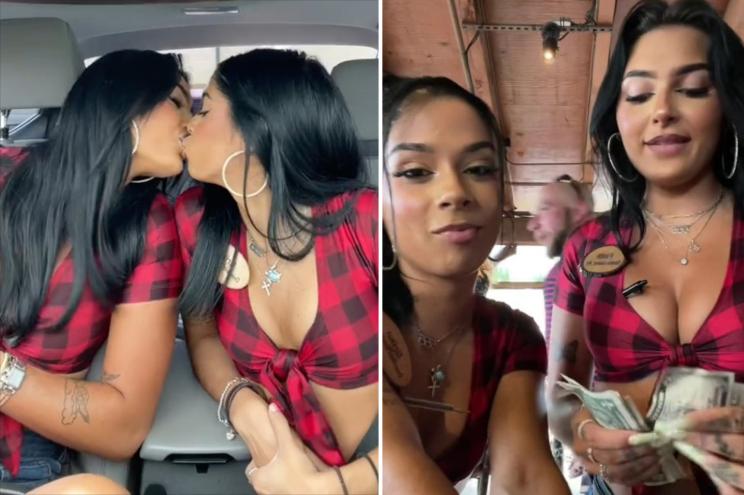 They’re showing off their big tips. Two stunning servers have gone viral on TikTok after revealing how much money they rake in during a Saturday shift at a Twin Peaks restaurant in Florida. The waitresses, identified only as Erika and Faith, posted their video to the viral streaming platform site last week, where it has clocked up over 2.3 million views as of Thursday evening. Erika and Faith — who have declared they are “dating” — started off their video by sharing a kiss in their car before clocking in for their shift. “Come to work with us a couple who work at Twin Peaks on a Saturday night,” Faith told TikTok fans, just before work commenced at 4.30 p.m. The couple are required to wear low-cut plaid crop tops as part of their uniform at Twin Peaks, which has been described as a “breastaurant.” In the clip, Erika and Faith were subsequently seen serving tables, occasionally taking a break to count up the cash and card tips they had procured. “We’re currently so busy, we’re stressed,” Erika revealed during the clip, with the restaurant seen buzzing behind her. At the end of the couple’s 9-hour shift, which concluded at 1.30am, Faith revealed she had made a whopping $423 total in tips. Erika had less luck, bringing in $275. She explained that her figure was much lower than her girlfriends, due to a walk-out and a table mix-up. Many commenters wondered whether they were in the wrong profession, with one saying: “i make 400 as a cashier ever WEEK after working 35 hours.” It pays to be pretty. Unfortunately I wasn’t blessed so I have to work at a basic restaurant and make your one day salary in a week,” another commiserated. The pair’s video was so successful that they made a second installment the following Saturday, where they again clocked up their tips for TikTokers. Faith brought in $375, while Erika came out on top with $380 in gratuities. Both Faith and Erika made similar amounts of money to a Hooters waitress who recently went viral with own video revealing how much she made in tips during a regular shift. That server, who also works in Florida, procured $282 in cash and $100 sent via CashApp during an ordinary weeknight of work. However, the “breastaurant” workers are far out-earned by Arizona bottle service girl Nina Angelina, who made an eye-watering $4,800 in tips while recently working an event at a Scottsdale club.