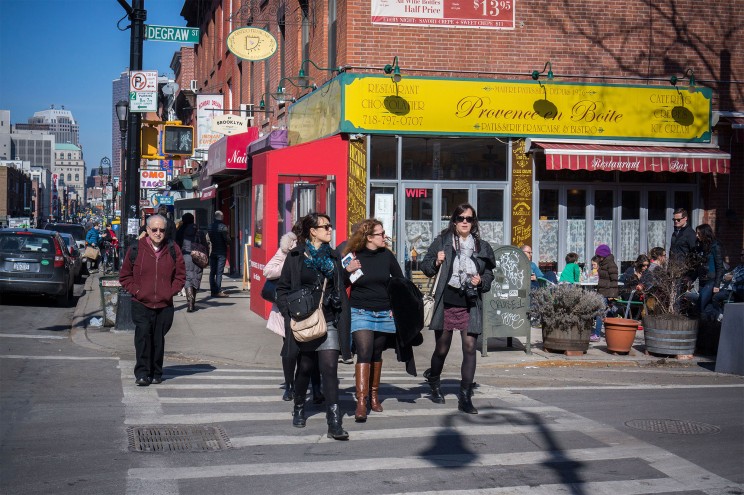 Many small businesses in Brooklyn are still struggling to stay afloat as the city marks two years since the coronavirus pandemic started shutting things down, a new survey reveals. While the city took some steps to return to normalcy in 2021, only 41 percent of merchants and other companies reported an increase in year-over-year revenues from 2020, the Brooklyn Chamber of Commerce poll of 185 of its members found. Meanwhile, 72 percent of firms reported sales lower than pre-pandemic 2019 levels, the survey said. In addition, 68 percent of merchants reported losses of customers compared to 2019, and 41 percent of respondents said they’re grappling with labor shortages, while 26 percent reported having fewer employees than two years ago. “What our end of the year survey definitively shows is that business owners are continuously facing ongoing challenges roadblocking the truly robust recovery New York City deserves and is capable of achieving,” said Randy Peers, president and CEO of the Brooklyn Chamber of Commerce. A majority — 56 percent of respondents — said they did not meet their post-COVID-19 recovery goals. About 25 percent of businesses said they were unable to operate or had to close for periods of time due to shortages last year. Difficulties paying rent persisted for 33 percent of businesses in 2021, and some of them are now in jeopardy of closing since the state lifted its 20-month pandemic-inspired eviction moratorium, according to the chamber. During the height of the pandemic in 2020, many merchants were forced to shut down to curb the spread of the virus and nearly a third never reopened. Last year, 40 percent of companies reduced their hours of operation, two-thirds said they performed a tech overhaul of their business model, including converting to more online/e-commerce, while 26 percent said they changed their product mix. The COVID-19 outbreak forced other owners to delay opening new bars and eateries. Therapy Wine Bar 2.0 in Brooklyn opened in November — a year later than planned — because of the pandemic, said owner Angela Terry. “It was definitely a challenge to get in the mindset and say, `We’re going to make this happen,’” Terry said on Tuesday. Gov. Kathy Hochul recently visited her wine bar and restaurant to pitch her plan to make permanent alcohol-sales-to-go at bars and restaurants. The struggles reported by Brooklyn merchants are a microcosm of the challenges facing New York’s economy as a whole, as the city and state attempt to emerge from the pandemic. New national employment statistics show that New York is experiencing the slowest recovery of the mainland states — with jobs still down 5.8 percent in the private sector from pre-pandemic levels. Only tourism–heavy Hawaii was worse, minus 10.9 percent. New York in January had recovered nearly 75 percent of the post-pandemic jobs decline, while employment in the U.S. as a whole exceeded 90 percent of the February 2020 level, according to U.S. Labor Department statistics. “At January’s growth rate, however, New York still won’t fully recover until the end of 2023, while the nation is on track to hit the pre-pandemic level within this year,” EJ McMahon of the Empire Center for Public Policy said in his analysis of the figures. “All of New York’s other neighboring states were much further along on the road to recovery — with New Jersey in the strongest position, down just 2.2 percent from the pre-pandemic level.”