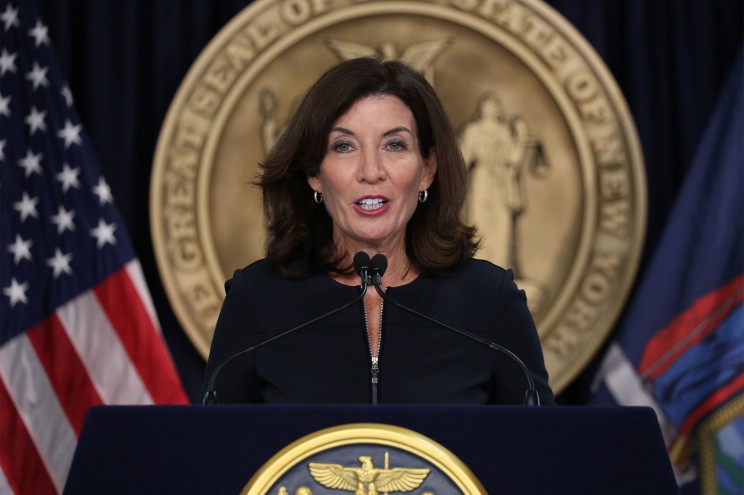 Cannabis retailer MedMen plans to ask a judge Wednesday for permission to subpoena Gov. Kathy Hochul’s office, according to New York State Supreme Court records. MedMen wants to look for evidence that Hochul and her office forced the company to sell its New York operations as a favor to political contributors. Hochul’s office has strongly denied the allegation. Last month, MedMen alleged in New York State Supreme Court that Hochul’s administration used improper influence in December to help recreational pot seller Ascend Wellness seal its $75 million deal to buy a majority of the MedMen marijuana dispensary chain’s New York business. MedMen’s lawsuit alleges that Hochul’s office pushed regulators at the Office of Cannabis Management and its Cannabis Control Board to OK the controversial deal after dragging their feet for nearly a year — just days after one of Ascend’s executives attended a fundraiser for Hochul’s reelection campaign, the suit clams. MedMen had agreed to sell its New York operations a year ago. But those New York operations have likely risen in value during the last few months since Hochul has fast-tracked the rollout of cannabis retailers. So MedMen likely wanted the deal to expire, which it would have on Jan. 1 if state officials hadn’t taken action. The request to Judge Margaret Pui Yee Chan is to subpoena the Governor’s Office for any records pertaining to a Dec. 8 Hochul fundraiser targeted to the cannabis industry. MadMen wants to see who attended and contributed. MedMen alleged last month that Ascend President Andrew Brown was at the fundraiser and that Ascend CEO Abner Kurtin met with Hochul representatives two days later — raising “a clear inference of improper influence by Ascend on the state approval process,” MadMen claimed. MedMen also wants to see any communications that exists between Hochul’s office and Ascend concerning the Cannabis Control Board — and communications between her office and the Cannabis Board. Since last month’s filing, there have been different versions about what happened: A spokesman for law firm Feuerstein Kulick, which arranged the Hochul fundraiser, told The Post that Ascend’s Brown was not at the event. The Post did find that Ascend made three contributions to Friends for Kathy Hochul on Oct. 28, totaling $15,000, according to the New York State Board of Elections. A Hochul spokeswoman told The Post last week that “These [MedMen] allegations are full of falsehoods,” saying that “none of the Governor’s senior team members named here have ever met with these individuals [from Ascend].”