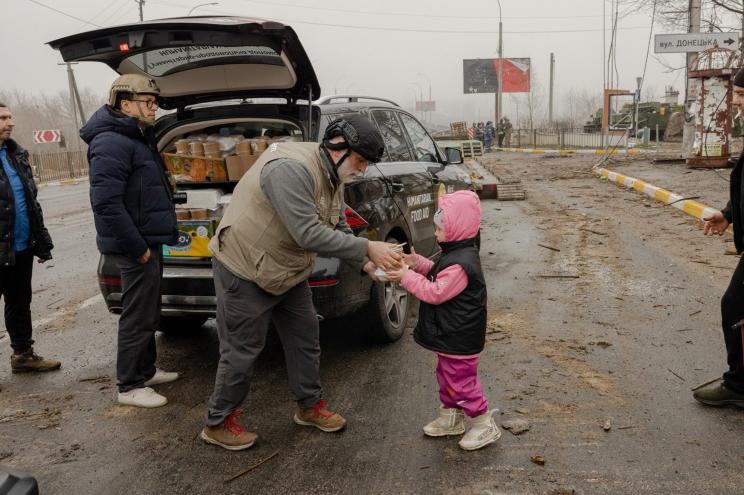 Days after a Russian missile hit a community kitchen in Ukraine operated by José Andrés, the celebrity chef says he’s still cooking. Four staffers at Andres’ World Central Kitchen were wounded along with dozens of others. At least one person was killed. Yet the fast-growing chain of kitchens are still open after serving up nearly 12 million meals since Russia’s invasion began Feb. 25. Hospitalized staffers at the destroyed kitchen say they want to get back to work when their burns heal. Others have managed to salvage food and equipment that is already with one of the other two dozen WCK kitchens in war-torn Kharkiv. “If anything we are expanding,” Andrés told Side Dish on Monday. “Everybody is still cooking and taking care of people. If the children are here, we are here. We opened 10 more restaurants today.” The Spanish-born American celebrity chef — based in Washington, DC — has restaurants across the US, including New York. Andrés launched WCK in 2010 to help people survive natural disasters. This is his first war. “Is it scary? Of course. It’s a war,” Andrés said. “You can be hit by a bomb or missile at any time. But people need our help.” “When you are delivering food to places where the Russians just left and you realize there are mines all around you, and sirens keep going off right and left, you know you are in a different situation,” he added. “But we’re never going to solve problems without taking some risk.” Andrés is one of the first two recipients of Jeff Bezos’ $100 million Courage and Civility award, and he’s using some of the money in Ukraine, which is WCK’s biggest operation to date. The things he’s seen he will never forget. WCK was in Kramatorsk when the train station — where thousands of women and children were trying to get to safety — was bombed, killing at least 54 people. Andrés also was in Bucha, where Russians committed horrific war crimes — rape, torture and murder — hours after its liberation. “When you see cars destroyed with children’s seats and you know this was a family trying to flee, it touches you,” Andrés said. “And when you deliver food to people who haven’t had real food in more than 30 days, you see the sorrow and the happiness — the horror of what they experienced and the happiness of liberation — not a real happiness, but a contained happiness. It’s difficult to explain but you see it in their eyes. “Like the first time I arrived in Bucha. I said I’d come back with more food and they were surprised when I did. It’s this kind of reassurance people need to see to know that even in the middle of a war, things are going to get better. This gives you a kind of joy — only that work continues even as people keep dying. That’s why it’s a very contained satisfaction,” Andrés said. WCK also pays local partners to provide meals and delivers 25-pound food bags for people who can cook at home. They operate in more than 90 Ukrainian cities and towns, as well as in Poland, Moldova, Romania, Slovakia, Hungary and Spain. They deliver 300,000 meals a day and have so far transported 6.1 million pounds of food. President Biden toured WCK’s operation in Poland, where celebrities like Liev Schreiber and chef Marc Murphy have volunteered. Andrés was at the South Beach Wine & Food Festival in Miami when Russia launched its invasion on Feb. 25. He left before speaking at a friend’s dinner. Within hours of the invasion, WCK was on the ground in Ukraine. WCK is based on donations and has no government contracts. Last week, Andrés called from Chernihiv, near Belarus on the road to Kyiv, where he took the first train in following a 39-day siege, during which the town was without heat, gas, electricity or water. Trains and bridges were destroyed along with thousands of homes. Around 100 people a day were dying at the peak of the siege. Bodies are still surfacing. “The people were so happy to see that train, and people rebuilt the bridge in four days,” Andrés said from an Italian restaurant that is now serving 10,000 to 20,000 meals a day. It was after the 8 p.m. curfew and Andrés was hunkering down for the night, armed with a sleeping bag, and his phone. “These guys are a great story. There were no trains or bridges [during the blockade] but they cooked non stop, even hunting deer and cooking it with potatoes. People were still crossing the river by boat to get food,” Andrés said, adding that Chernihiv “looks like a bad movie. Every home has been destroyed or damaged.” Thankfully, food scarcity is not an issue. But transportation is. “Everybody has to be very creative. It’s not like you pick up the phone and order what you need like I do for my restaurants. And most supermarkets are still closed. Imagine the ports are totally closed and shelling has been going on for 50 days. Everything is coming mainly from Poland or Romania or even more complicated routes,” Andrés said. WCK’s CEO, Nate Mook, who was in Kharkiv on Saturday when the Russian missile hit, said that despite the danger, Ukrainians — and WCK — are still fighting. “They were shaken up, of course. It’s a horrific, shocking event. But they want to get back to work. It epitomizes the resilience and spirit of the Ukrainian people. They are looking forward to their victory. They won’t give up or give in,” Mook said.