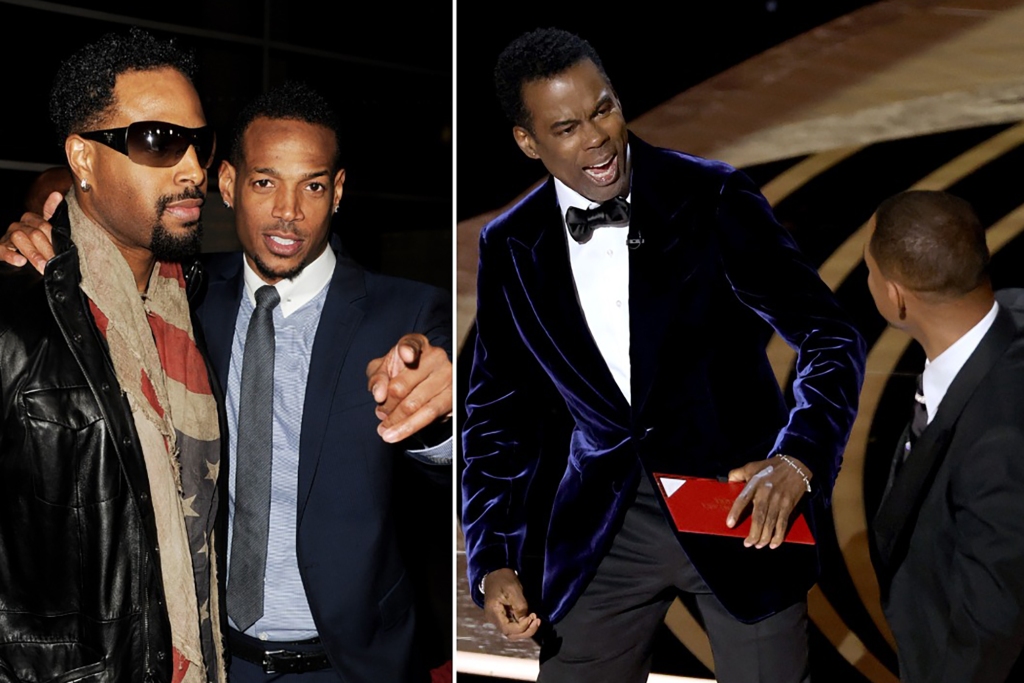 Turns out Will Smith’s infamous slap heard around the world wasn’t the first “smackdown” connected to Chris Rock. Shawn Wayans seemingly predicted the future of the viral Oscars 2022 moment — when Will Smith casually strolled up on stage and smacked the “Everybody Hates Chris” creator for making a bald joke about Jada Pinkett Smith — way, way back at the 2000 MTV VMAs. Shawn’s brother, Marlon Wayans, resurfaced a prescient clip of Shawn, 51, impersonating a trash-talking Rock at the millennium music awards show. The two-and-a-half-minute clip above features an ending that is eerily similar to Sunday’s violent Oscar night debacle. “Maaaaan, not to ‘kick’ a brother when he’s down… BUT we predicted this s–t exactly,” Marlon 49, posted on social media alongside a clip of his bro cracking up the crowd. The “Scary Movie” star continued, “When art imitates life then LIFE actually happens. S–t we were way ahead of our time. #thesejustjokes let’s laugh again.” The now-viral clip — it’s racked up million views across Youtube, Twitter and Instagram — features Shawn rocking a cream-colored suit and cracking brutal jokes about the all-star audience. As the “Little Man” actor strolled back and forth across the stage, he called out celebs such as Britney Spears, Jay-Z, Destiny’s Child, lawyer Johnnie Cochran and Diddy. Yes, Diddy — who reportedly brokered peace talks between Smith and Rock after Sunday’s Oscars debacle — plays a crucial role in the Wayans brother’s bit: A lookalike appears on stage to smack the faux Rock to the ground for running his smart mouth. Amused fans across social couldn’t help but notice the similarities from 2000 and alas, 22 years later. “Always been ahead of y’all time,” one user agreed on Marlon’s post. see also “Not Marlon Wayans predicting the slap. I’m weak,’ another joked on Twitter. One viewer chimed in, “Will Smith was laughing his ass off on this, too!” One wrote, ‘Life Is Truly Full Circle. ⭕️,” with someone adding, “Shawn sound just like Chris Rock 😂😂.” Meanwhile, Marlon discussed the Oscars altercation with People during the Vanity Fair Oscar Party. He told the publication he has known Rock, 57, since he was 14 and Smith, 53, since he was 20. The “King Richard” actor has “always been such a classic dude,” Marlon said, and “I love them both.” He added, “Chris Rock, he’s always Chris Rock; you’ve got to expect that from Chris Rock. And sometimes when you’re best friends, worst things happen, and I wish it didn’t happen. … [I] hope they seek out and work it out.” The “GI Joe: Rise of the Cobra” star said that as a comedian, “You’ve got to be able to crack jokes. You don’t know what somebody’s going through … he cracked the wrong joke on the wrong day. And sometimes you hit the wrong person in the wrong moment … It was just bad timing.”