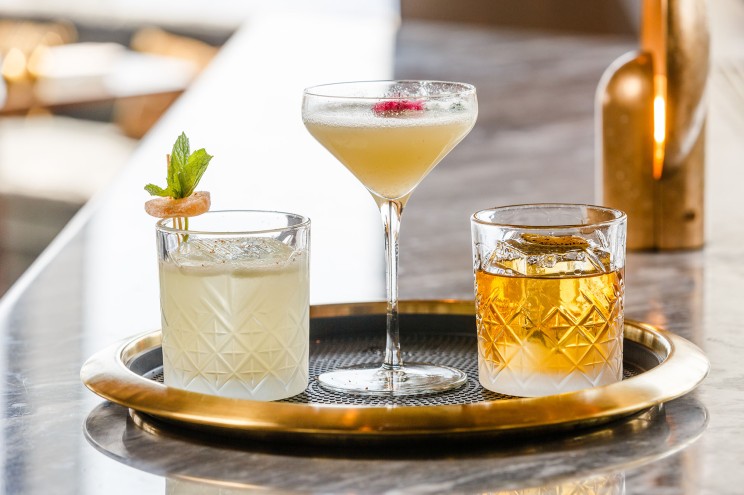 The city that never sleeps is finally getting back to its old self as people tiptoe into late nights that were cut short during the pandemic. And a cocktail bar opening on the 101st floor of 30 Hudson Yards – the home of the trendy Edge observation deck – is set to usher people back into the night with high style: literally. Peakaboo, a late-night cocktail bar, will debut on Feb. 5, Side Dish can exclusively reveal. The cocktail bar is 1,149 feet in the air – one level above the Edge, which crowns itself the highest viewing platform in the Western Hemisphere. It will be open Thursdays through Saturdays until 2 a.m. – with options to go later if demand is there, said David Edwards, director of operations for RHC, the hospitality company behind Peak restaurant and Peakaboo. “As we come out of the pandemic, New Yorkers can’t wait to stay out late after dinner – or to start their nights late,” he said. “Everybody wants to go out and have a good time — responsibly.” The news comes as Cafe Carlyle gears up to relaunch its famed dinner cabarets, with Isaac Mizrahi as the first performer, on March 1. There’s also been a slew of luxury cocktail lounges opening, including Temple Bar, The Parlour Room, Saint Tuesday, The Georgia Room and Bar Chrystie inside Ian Schrager’s Public Hotel. At Peakaboo, the space was designed by David Rockwell, and the venue will be in the Peak restaurant at Hudson Yards. It features a 12-seat curbed grey marble bar, a 60-seat lounge, DJ performances and stunning city views. The menu will feature a 1,400-bottle wine list — with glasses starting at a modest $12 — and a list of 300 high-end spirits, cognacs and whiskeys, along with hard-to-get Champagnes (Dom Perignon, Ruinart and Krug) by the glass or bottle, said Zack Kameron, beverage director for Peakaboo and Peak. There will also be high-end tequilas, like a limited-edition bottle from Clase Azul Tequila Dia de Muertos that will cost $3,000. “It comes in a beautiful black hand-painted carafe with 24 karat gold skulls,” Kameron said. “It’s very hard to get. I want our guests to know they are in a luxurious setting with exclusive opportunities.” As far as the bottle goes, he says: “It’s really sought-after by a certain crowd.” Bar bites will include classic options, like caviar, chilled shrimp with saffron, oysters, beef tartare and black truffle tarts with shitake mushrooms and cheddar. Meanwhile, New Yorkers are also gearing up for the reopening of Cafe Carlyle, located inside the Upper East Side’s Carlyle Hotel, which has seen an influx of a younger downtown crowd at its Bemelmans Bar since it reopened last May. Cafe Carlyle reopens next month after an almost two-year absence. “It’s really an institution, and one of the most elegant dining destinations, where people can get up close and intimate with their favorite performers,” said Tony Mosca, the Carlyle’s food and beverage director. For the lucky few restaurants that are surviving – and even thriving – as others struggle amid the Omicron resurgence, post-pandemic expansion is done in baby steps. At the Carlyle, for example, Bemelmans Bar opened last May, followed by Dowling’s restaurant last October — and now Cafe Carlyle will reopen in March. The wait might seem long, but the Carlyle, like other places all over the city, was waiting in part to see if there would be new pandemic restrictions imposed by the city and state. But there aren’t: just what we have all come to think of as the new pandemic normal — vax cards, masks when not eating and drinking and extra cleaning and sanitizing. Ariel Palitz, senior executive director of the city’s Office of Nightlife, said: “There is no doubt that we are still in the recovery process.” But there’s a hunger to go out and socialize, she added. Other late-night clubs are joining in: Somewhere Nowhere, a restaurant and lounge/night club at the top of the Renaissance New York Chelsea Hotel on West 26th Street, launched eight heated “teardrop igloos” in mid January. They can seat up to five people each. The venue is open Thursday through Saturdays from 5 p.m. until 4 a.m. and from 10 p.m. until 4 a.m. on Sundays, with “epic” city skyline views, said owner Sameer Qureshi. The kitchen is now open until midnight but will stay open until 3 a.m. come March. Igloos can be rented for around $200 per person — and that money can be spent on à la carte food and drink items.