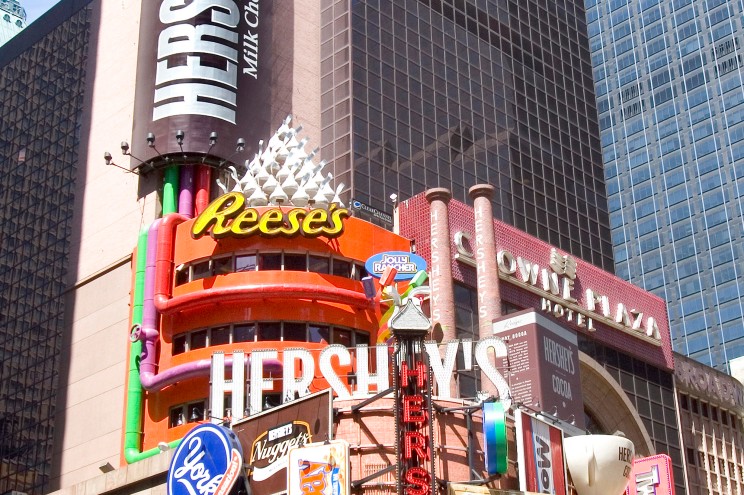 The towering Crowne Plaza Hotel — a once brightly lit but now mostly dark skyscraper in the heart of West Midtown — is entangled in a bitter legal struggle with no easy end in sight. Publicly traded developer/landlord SL Green owns a sliver of land beneath the 46-story tower at 1605 Broadway between West 48th and 49th streets. It claims that Argent Ventures, which owns the debt on the property, has turned it into a “zombie building” on which it is paying no taxes or bills, even while it collects rental income from the building’s office and store tenants, which remain open. SL Green wants a Manhattan Supreme Court judge to appoint a receiver to manage the whole property, reopen the 795-room hotel, and to collect the revenue to pay off the obligations — including ground rent that it says Argent owes to SL Green. According to Green’s court filing, Argent owes a total of over $16 million in property taxes and tens of millions more for labor, water and other charges. Green views a receiver as necessary to safeguard the building’s future and also to protect its investment in the land, which will likely rise in value post-pandemic. SL Green’s court move is a counter-punch to debt holder Argent, which is owned by investor Arnold Penson. The Crowne Plaza closed in March 2020. In December 2020, Argent bought the debt owed by Vornado Realty Trust, which was the hotel building’s managing partner and investment manager, at a deep discount — $90 million for a $195 million mortgage — the Real Deal reported at the time. Vornado defaulted on a total $274.35 million in debt on the site, according to the company’s 10-K SEC filing in December 2021. Vornado owned all the land under the building except for the small slice purchased by SL Green. It snatched up the 11,000 square-foot parcel — about one-quarter of the total ground footprint — for $121 million in September 2021. Penson then sued in an attempt to invalidate the purchase, claiming that his company had first-refusal rights on any land sale But SL Green says that under long-standing agreements at the location, first-refusal rights were reserved only for the “tenant” — i.e., to Vornado, which declined to match SL Green’s offer. Argent, SL Green claims, is not a tenant because it never took legal possession of the leasehold. It declined to hold a universal commercial code debt auction — which it could have done and would have allowed it to take title. Instead, it merely replaced Vornado managers with its own people while “cynically ignoring” all of its obligations, such as paying contractors, utilities, taxes and rent,” which “put the building and the land at risk,” according to SL Green’s court filing. But Richard Shindler, president of the Argent affiliate that controls the property, responded: “SL Green’s deliberate choice to acquire a portion of the Times Square Crowne Plaza building in violation of [Argent’s] right of first refusal has forced [us] to commence litigation to enforce its contractual rights.” He blamed the SL Green action for holding up the hotel’s reopening and claimed that neither Argent nor its affiliates “has been paid one penny” since it acquired the mortgage and mezzanine loans. In addition to the hotel, the tower also has more than 196,000 square feet of office space, more than 17,000 square feet of retail space including a huge Krispy Kreme outlet, and a 159-car parking garage.