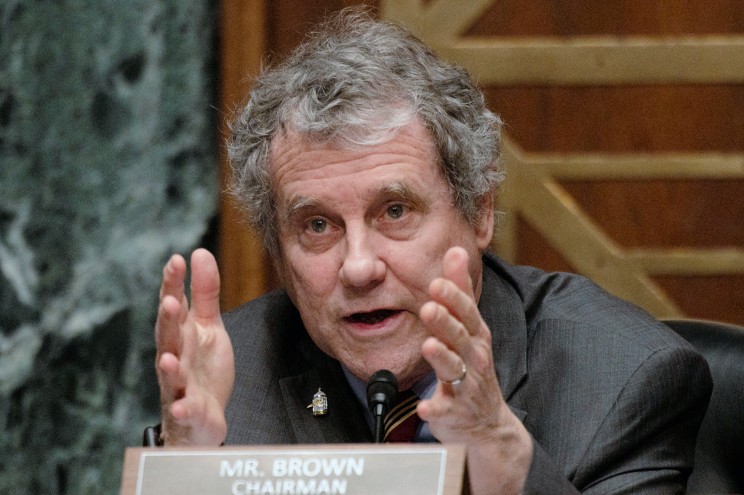 This year’s wave of Super Bowl crypto commercials drew sharp criticism from the top Democrat on the Senate Banking Committee, who grumbled that they were proof that cryptocurrencies shouldn’t be treated as a legitimate form of money. Senate Banking Committee Chair Sherrod Brown (D-Ohio) slammed the crypto ads during a Tuesday hearing on stablecoins. He argued the crypto platforms responsible for the advertisements aren’t adequately informing Americans about the potential risks of investing in cryptocurrencies. “The fact that these companies felt the need to advertise at all is a bit of a giveaway about one of their major claims,” Brown said at the hearing. “If this were actually meant to be used as currency, why would you need to buy ads?” “I don’t think I’ve ever seen, in 40 years of Super Bowl watching, the Federal Reserve buy a multimillion-dollar commercial for US dollars,” he added. “That’s because crypto isn’t money. It’s designed for speculation.” Coinbase, FTX and Crypto.com were among the platforms to buy commercials during the Super Bowl, with 30-second time slots selling for up to $7 million a pop. Coinbase’s ad, which featured a floating QR code, prompted a wave of traffic that briefly caused the crypto platform’s website to crash. Brown said the Super Bowl commercials showed the companies are “looking to make big profits” and were “desperate to reach as many Americans as they can.” “The ads left a few things out. They didn’t mention the fraud, scams, and outright theft,” Brown added. “The ads didn’t point out that you can lose big in crypto’s huge price swings. They didn’t tell you about the high fees pocketed by the crypto companies.” Critics of bitcoin and other cryptocurrencies have long expressed concerns about the volatility of their prices. Bitcoin was trading at $43,841 as of Wednesday afternoon, a steep drop compared to an all-time of $69,000 in November. Meanwhile, the Biden administration has called for further analysis and potential regulation of so-called stablecoins, which are a form of digital currencies whose value is tied to real-world assets or currencies, such as the US dollar. Earlier this year, Bank of America analysts said they viewed the US government’s issuance of a digital coin as “inevitable.”