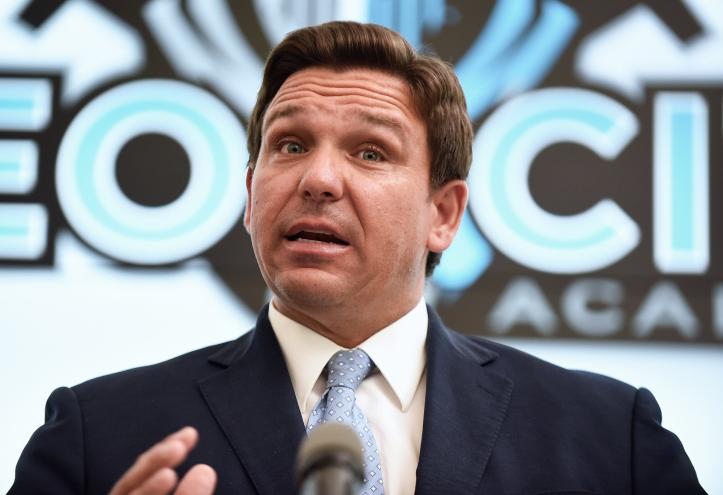 Florida Gov. Ron DeSantis said he would be open to stripping Walt Disney Co. of its special self-governing status over its public opposition to the recently enacted “Don’t Say Gay” law. DeSantis has been at loggerheads with his state’s largest employer over the “Parental Rights in Education” bill, which prohibits teachers from discussing LGBTQ topics like sexual orientation or gender identity with students unless they’re in the fourth grade or higher. DeSantis signed the bill last week, prompting Disney to release a statement vowing to help defeat it in courts. “Disney has alienated a lot of people now,” DeSantis told reporters in West Palm Beach on Thursday. “And so the political influence they’re used to wielding, I think has dissipated. And so the question is, why would you want to have special privileges in the law at all?” The governor added: “And I don’t think that that we should.” In 1967, Florida created the Reedy Creek Improvement District, a semi-private, independent governing entity controlled by Disney. It gave the company the power to approve construction projects for its theme parks as well as build and manage the necessary infrastructure to support its operations. The district was also empowered to levy its own taxes and then use the revenue to build public services and maintain roadways and bridges. If the GOP-led state government repeals the law, Disney World and all of its properties would be regulated by Orange and Osceola counties in central Florida. Disney was initially drawn to Florida in the mid-1960s due to the promise that the company could function as its own self-government. The Post has reached out to Disney seeking comment. DeSantis wasn’t the only GOP state official who engaged in some saber-rattling over Disney’s special status. “Yesterday was the 2nd meeting in a week [with]fellow legislators to discuss a repeal of the 1967 Reedy Creek Improvement Act, which allows Disney to act as its own government,” state Rep. Spencer Roach, a Republican, tweeted on Wednesday. “If Disney wants to embrace woke ideology, it seems fitting that they should be regulated by Orange County.” Disney executives led by CEO Bob Chapek initially were reluctant to express public opposition to the measures, citing their desire to stay out of controversial political debates. But that angered a large number of Disney’s liberal-leaning employees who staged walkouts and other forms of public protest, ratcheting up pressure on Chapek and other corporate leaders to take a more forceful stand.