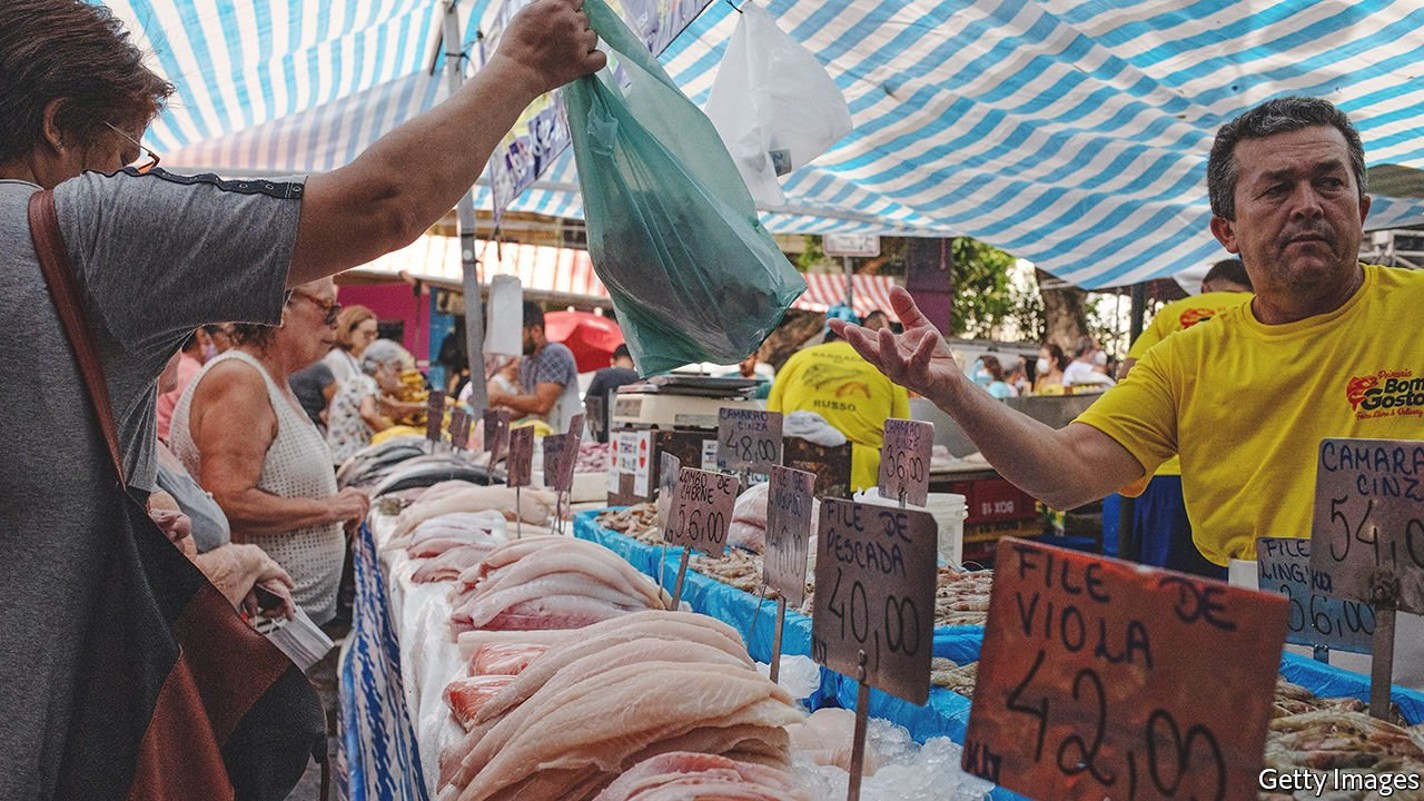 FOR YEARS Brazilians had little incentive to abandon cash. Wiring 50 reais ($10) to a friend would set you back an extra 16; swiping a credit card, 2% of the cost of your purchase. For e-commerce firms this made doing business particularly cumbersome. Customers wanting to buy something online, but not wanting to incur the costs of a digital payment, could choose instead to print a payment slip (boleto), take that slip to a shop or post office, and hand over the cash. The problem for e-commerce firms, however, was that not everyone who printed a boleto ended up going to a shop to fork over the cash—meaning that many transactions were never completed. Then came Pix, an instant-payments system operated by the central bank. Launched in November 2020, it has transformed the way Brazilians make payments. The platform allows consumers and merchants to send and receive money via a QR code, without having to share details of their wallet, fintech provider or bank. In April around 118m people used the platform—or more than two-thirds of Brazilian adults. In the last quarter of 2021 they made a staggering 3.9bn payments. Already Pix has surpassed debit and credit cards as the most popular method of payment in Brazil. One in five transactions now takes place on the platform’s mobile app. As an idea, Pix is not new or unique. India’s Unified Payments Interface (UPI) began life in 2016. Other countries have established similar schemes. Nonetheless, Pix has been a remarkable success. For years the central bank sought to make Brazil’s financial system more competitive, digital and inclusive. Pix has helped achieve those aims. Its rapid adoption could also contain lessons for others. Several factors explain why Pix has been so popular. For a start, it is easy to use. Setting up an account takes a matter of minutes. A user’s identifying “key” can be a CPF (a sort of tax ID), a phone number or a randomly generated string of digits. Sending money to recipients at another bank is quick and painless. Policymakers also acted to encourage adoption. Unlike its Mexican counterpart, whose Pix equivalent has been less successful, Brazil’s central bank compelled big banks and fintech firms to join its platform. During the covid-19 pandemic it mandated that emergency payments made by the government should also be available through the app. In this way, up to 30m unbanked Brazilians received a cashless payment for the first time. Most payments are of small value and take place between individuals. The ubiquity of Pix is such that beggars often ask for money with a QR code. These transactions are possible because they are so cheap. Pix is free to use for individuals, and is by far the lowest-cost option for firms. The introduction of Pix has had a mixed effect on the country’s banks. Current-account service fees charged by Brazil’s five biggest lenders were almost 2.7bn reais lower in 2021 than the year before. But banks insist that Pix also presents them with opportunities. For one thing, as society goes cashless, they are spending less on transporting lorryloads of banknotes. And although it is not necessary to have a bank account to use Pix, the platform seems to encourage people to open one. According to Mastercard, a credit-card giant, Brazil reduced its unbanked population by as much as 73% during the pandemic. There are now more potential customers to sell credit products to, says Julio Paixão of Bradesco, one of the big five banks. One of the biggest surprises is that despite the astronomical success of Pix, the number of credit-card transactions has continued to grow. Pix is not just serving as a substitute for other cashless payment methods, but increasing them. There have been some unforeseen problems. Since Pix has been introduced, the number of “lightning kidnappings” has surged, as criminals forced users to transfer large sums of money. In response, Pix has introduced a night-time limit on transactions. Staff at the central bank have been on strike, on and off, since early April, raising concerns about the operability of the system. Others worry about the possibility of a data breach (though so far there do not seem to have been any). By and large, however, shortcomings are being rapidly addressed. The central bank has plans for further expansion. By the end of this year Pix should be available offline and further integrated into open banking, a system that allows customers to share their transaction data with fintechs. Soon there will be an option to pay for things in instalments. And in the coming years, there are plans to make the app available abroad, which would facilitate remittances and other cross-border payments. The success of platforms such as Pix may have far-reaching implications. Hyun Song Shin of the Bank for International Settlements, the central bank for central banks, considers them “a huge leap” towards the adoption of central bank digital currencies (CBDCs). A retail CBDC requires a register of users and their real names, and a full record of who pays what to whom and when, he explains. With Pix, you have all that already, as well as the technical standards that govern the exchange of information; it is 80% of the way to a CBDC, he reckons. Brazil’s central bankers, who are working on a CBDC of their own, seem inclined to agree. The Pix revolution could be just the beginning. ■