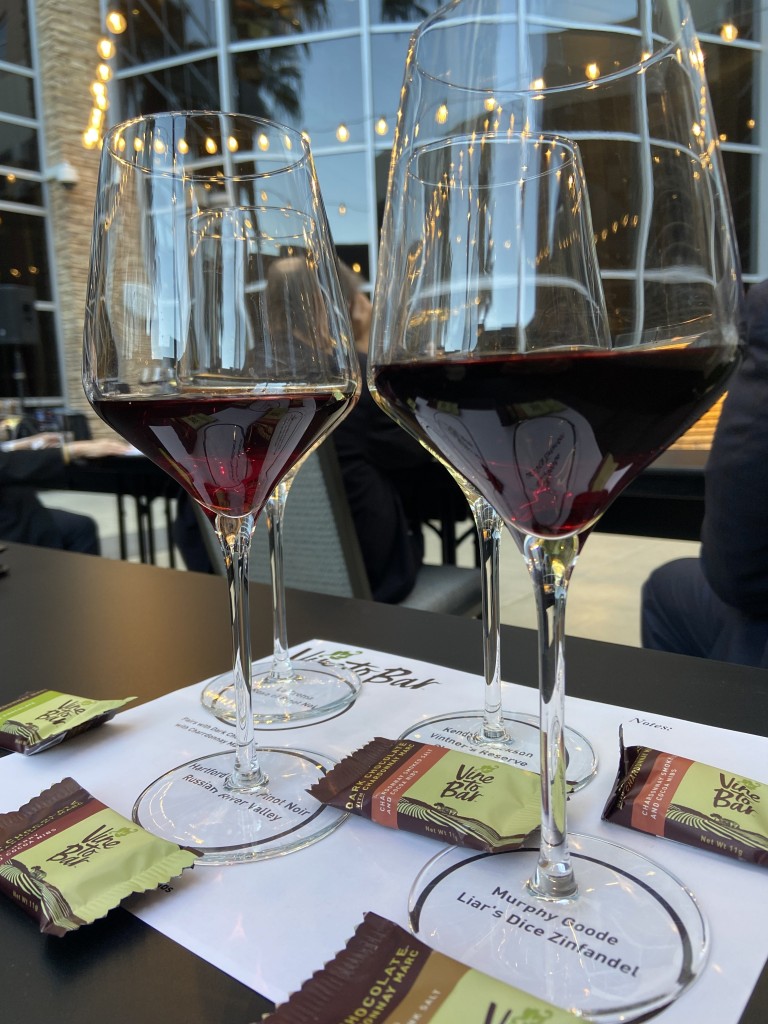 The discarded materials from grapes used to make white wine soon could become a new “superfood” — and be used in a chocolate that debuted here last week. A group of scientists and entrepreneurs are aiming to transform Chardonnay marc — the discarded grape skins, seeds and stems left over from winemaking — into an “upcyled” superfood rich in nutrients that some researchers say improves gut, cardiovascular and brain health. Such “upcycling” also would be good news for the environment, since the remains of grapes pressed for winemaking equate to 10 billion pounds of waste a year globally — or around 830,000 pounds in California alone, according to Scott Forsberg, president of Vine to Bar, a new chocolate company whose product is made with Chardonnay marc. The chocolate debuted last week at this city’s Winter Fancy Food Show, which was attended by John Legend, Chrissy Teigen and Food Network star Giada de Laurentiis. Both Vine to Bar and Sonomaceuticals — which developed the Chardonnay marc — are owned by two wine industry mavericks — Barbara Banke, of Jackson Family Wines, and Peggy Furth, formerly of Chalk Hill Estates & Vineyards. (The friends also launched luxury WindRacer Wines last July.) It took more than 10 years — and $10 million, including a $500,000 grant from the USDA — to transform Chardonnay marc into a would-be superfood. Next, the two had to figure out what to do with it. At first, Forsberg said, they tried adding it to pastries and cookies and breads. But the Chardonnay marc changed the texture of the food, making it too dense without the “light, fluffy flavor” that is key to fresh baked goods. Chocolate, however, turned out to be the perfect match. “Both of these ancient foods revered for millennia share a commonality: They are high in antioxidants and optimize blood flow, which is good for your brain and cognition,” Forsberg asserted. Chardonnay marc is said to be both rich in nutrients and flavanols — and also sweetens dark chocolate, said Vine to Bar’s chocolatier, Ralph Jerome, the former head of global innovation at Mars Inc., the big-time chocolatier. “The Chardonnay marc makes the chocolate taste better. It decreases bitterness and adds a fruity note. It’s a qualitative improvement,” said Jerome, adding that it took around a year to develop the bars. As for the marc, it’s made like this: At harvest, the winemakers dry and mill the pressed skins, pulp and seeds of the grapes into a pomace, preserving their fiber and flavor. “We have beautiful Chardonnay grapes. When you squeeze out the water and sugar, you are left with everything else. We clean it, dry it, mill it and the powder is everything that is left over,” Forsberg said. The Chardonnay grapes all come from Jackson Family Wines. And in the bars, the sustainably sourced cacao comes mainly from West Africa and South America. They contain 15% Chardonnay marc in different flavors, featuring almonds, Himalayan pink salt, Chardonnay smoked salt, tart cherry and cocoa nibs. Chardonnay marc also contains oligosaccharides, which are carbohydrates that are composed of at least three to 10 simple sugars. They serve as probiotics and serve as prebiotics to feed the good bacteria in the gut — and there may be even more of them than those found in human milk, according to researchers at the University of California Davis.