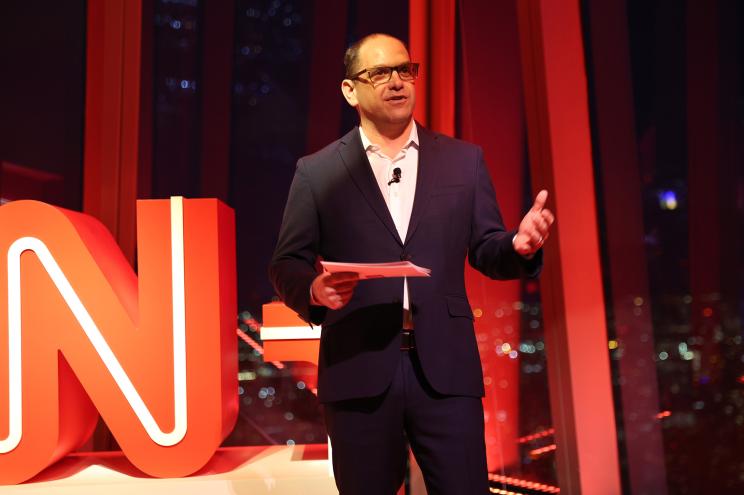 Monday night, speaking to a packed crowd at the swanky Peak restaurant in Manhattan, CNN’s Andrew Morse was looking for a Kumbaya moment — something to bring the troubled, ratings-challenged channel together following a string of high-profile firings and scandals that has cast doubt on its future. That something is known as CNN+. Morse is the point man in last week’s launch of the new, much heralded and capital-intensive streaming service. With ratings falling, and consumer cord-cutting on the rise, many people inside the network believe the future of CNN is dependent on the nascent streaming channel to attract an audience that is increasingly eschewing traditional cable. The speech and the high-profile (and expensive) setting for the channel’s launch was supposed to foreshadow good things to come. Morse heralded CNN+ as a “new chapter in CNN history.” He said the timing of the launch is perfect — just as consumers are increasingly embracing streaming content. Very weird turn He then started to thank the people who launched the new and possibly transformational product. And that’s when things got weird. Morse thought it would be smart to applaud the work of two people who couldn’t attend the soiree for obvious reasons: former CNN honcho Jeff Zucker and his No. 2, Allison Gollust. The duo not only were the brains behind the creation of CNN+, they also were recently and famously ousted — much to the chagrin of the network’s Zucker-loyal talent — because their recently disclosed romantic fling violated company-dating guidelines. Nearly in the same breath, Morse stepped in it again, this time giving ­kudos to the guy who controversially pulled the trigger, WarnerMedia chief Jason Kilar. “When he made those statements, everyone seemed to freeze,” said one person in attendance. “It was weird.” Even worse, Morse’s uneven tribute may well be foreshadowing an equally awkward future for the streaming service, people close to the network tell The Post. Of course, time will tell whether consumers are willing to pay $5.99 a month (just $2.99 monthly for life if you sign up now) for CNN’s second-string programming, reruns of the late Anthony Bourdain’s popular globe-trotting culinary show, “Parts Unknown,” softer spots featuring network talent, and a smattering of B-list celebs and pseudo thought leaders opining about food and culture. I did for the purposes of this column, but so far, CNN’s media team is keeping the launch metrics close to the vest. (All CNN would say is: “We are very happy with the launch of CNN+. Any reports indicating otherwise are completely false.”) My guess — and the guess of other media watchers — is that lack of chest thumping is a sign the initial results ain’t good. One clue: Since the launch, CNN’s original app — which I needed to download to get to the new streaming product on my mobile device — barely made the 200 most popular free apps on Apple last week, meaning it received no CNN+ boost. It was nowhere to be seen when last I checked on Friday. Talk to media-industry types and they will tell you that’s a decent indication CNN+’s subscriber boost was pretty mediocre, if that. People inside CNN are understandably worried. The network’s ratings are suffering because it no longer has its favorite foil, Donald Trump, to kick around. In a Trumpless news world, the channel’s left-leaning programming has competition from MSNBC but with much more overhead, meaning it’s spending more to compete for the same pool of viewers. Before CNN fired Zucker, he ousted CNN’s highest-rated anchor, Chris Cuomo, for giving brother Andrew advice during Andy’s sexual harassment scandal that forced him to step down as New York governor. Programming hole That hole in CNN’s programming is being filled by a rotating cast that included former weekend host Michael Smerconish — not exactly a household name. On top of it all, CNN’s audience is younger than other news networks (like that of Fox News, my employer). That may sound like a good thing for advertisers searching for that all-important 25-54 demo. But this demo is more apt to cut the cord and end their cable subscriptions altogether. Yes, CNN is immensely profitable, earning about $1 billion a year, I am told. But with cord cutting, those profits are likely to shrink pretty quickly over the next five years as cable operators pay less for CNN’s increasingly lower-rated shows. That’s why Zucker came up with the idea to spend a ton of money hiring hundreds of people to start a new streaming channel that will attract that demo that increasingly consumes programming on their mobile devices. Yet the economics of streaming are difficult. Sure, people like to watch stuff — including movies — at home, but they don’t like paying a ton for it. And it’s unclear if streaming news services work, meaning CNN+ might not be that magic bullet at least anytime soon. With all this fur flying, it’s also easy to forget the network is also being sold along with WarnerMedia to ­David Zas­lav’s Discovery Inc. in a $43 billion media megadeal. Zas hasn’t said much about CNN or the future of its streaming service and probably won’t until the deal closes this month. People who know him tell me the following: With Zucker out, Zas has no allegiance to CNN+ or its people. If subs don’t begin to grow, he will likely fold it into another streaming service, Discovery+, and lop off a chunk of the people Zucker hired. To cut costs, he’ll probably also scale back on some of its programming ambitions while focusing on other parts of the WarnerMedia empire. So much for streaming saving CNN.