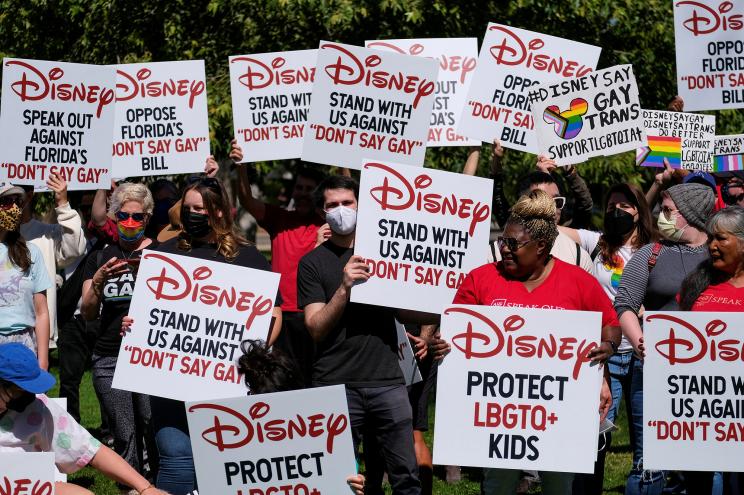 A Disney executive producer admitted she has been pushing a “not-at-all-secret gay agenda” for children’s animation, even as Florida Gov. Ron DeSantis signed the so-called “Don’t Say Gay” law this week. During a Disney staff meeting about the law — which bars Florida teachers from discussing topics like sexual orientation or gender identity with students unless they’re in the fourth grade or higher — executive producer for Disney Television Animation Latoya Raveneau touted Disney’s efforts to feature LGBTQ storylines. “In my little pocket of Proud Family Disney TVA, the showrunners were super welcoming . . . to my not-at-all-secret gay agenda,” Raveneau said in a leaked video obtained by journalist Christopher Rufo. “Maybe it was that way in the past, but I guess something must have happened . . . and then like all that momentum that I felt, that sense of ‘I don’t have to be afraid to have these two characters kiss in the background.’” “I was just, wherever I could, adding queerness,” Raveneau added. “No one would stop me, and no one was trying to stop me.” The leak of Raveneau’s comments came as Karey Burke, president of Disney’s General Entertainment Content, vowed to drastically increase inclusivity in its productions, promising that at least 50 percent of its characters will be LGBTQ or racial minorities by the end of the year. Burke made the pledge in a company-wide Zoom call Monday that was later posted to Twitter. The Disney execs made their comments after Florida Gov. DeSantis on Monday signed the Parental Rights in Education bill, dubbed the “Don’t Say Gay” bill by critics. Disney CEO Bob Chapek slammed the legislation after weeks of staying silent, and attempted to lobby DeSantis to kill it. A group of California Disney employees staged a walkout last week to protest the measure, wearing rainbow colors, holding signs with pro-LGBTQ slogans, and shouting, “Say Gay,” as they marched down the street. DeSantis ripped Disney for its stance, saying it “crossed the line” as a big corporation throwing its weight around in state politics. DeSantis likewise blasted Disney’s hypocrisy in pushing domestic social-justice causes while pursuing business in China — a regime notorious for human-rights abuses relating to the Uyghur Muslims, Hong Kong and Tibet, among others. DeSantis told supporters in Boca Raton earlier this month that Florida’s policies must be based on the “best interest of Florida citizens, not on the musings of woke corporations.” Raveneau said that when she joined the Mouse House, she assumed the company would try to keep LGBTQ elements out of content for younger audiences. “I love Disney’s content. I grew up watching all of the classics. They have been a huge informative part of my life, but at the same time, I worked at small studios most of my career, and I’d heard whispers. I’d heard things like, ‘They won’t let you show this in a Disney show.’ So I was a little sus[picious] when I started, but then my experience was bafflingly the opposite of what I had heard,” she said. Raveneau is executive producer on the upcoming Disney Junior musical series, “Rise Up, Sing Out,” featuring the music of The Roots, which “tackles the subject of coming together to fight racism and celebrate black culture!,” according to her LinkedIn profile. She is also director on the upcoming animated series, “The Proud Family: Louder and Prouder,” a coming of age animated series, featuring LGBTQ and racially diverse characters.