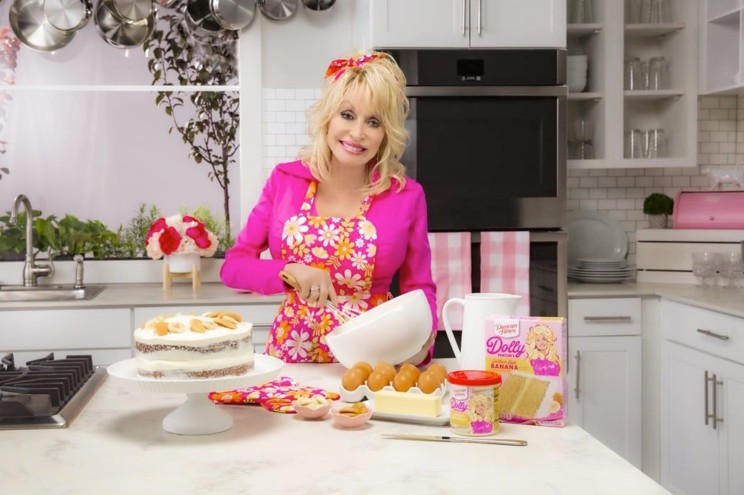 America’s sweetheart is now looking to indulge your sweet tooth. Dolly Parton, the beloved country music legend, is teaming up with Duncan Hines to release a line of cake mixes and frostings. Judging by the initial response, it’s already a hit. The Dolly Parton Baking Collection was so popular “that they are currently out of stock,” Duncan Hines said on its web site. The line includes special Dolly-branded limited editions of flavors including banana cake mix, coconut cake mix, buttercream frosting, and chocolate frosting. The products are due out soon in retailers across the country. Parton, the singer-songwriter who produced hit singles including “Jolene,” “9 to 5,” and “I Will Always Love You,” told CBS News that she picked up cooking while growing up in the south. “I love to cook and I learned to do that growing up in the mountains of East Tennessee,” Parton said. “My mom was a great cook, all my aunts and my grandma, so of course, I learned to cook that good ol’ southern stuff.” Parton said that after recently turning 76 years of age, she celebrated by having one of her branded banana-flavored cream cakes.. “I’m excited about it and I really think people are going to enjoy all these recipes,” she said. Parton remains popular among her fans. She recently surpassed 3 billion streams of her music online. She has been nominated for 50 Grammy Awards — winning 11 of them. She told CBS News that she’s a bit taken aback by her celebrity status. “It scares me to death sometimes,” she said. “I’m always sayin’ I’m not all that, I’m even not all there sometimes. “But it makes me feel good that I’ve been around long enough for people to feel like they know me and they’ve just kind of accepted me.”