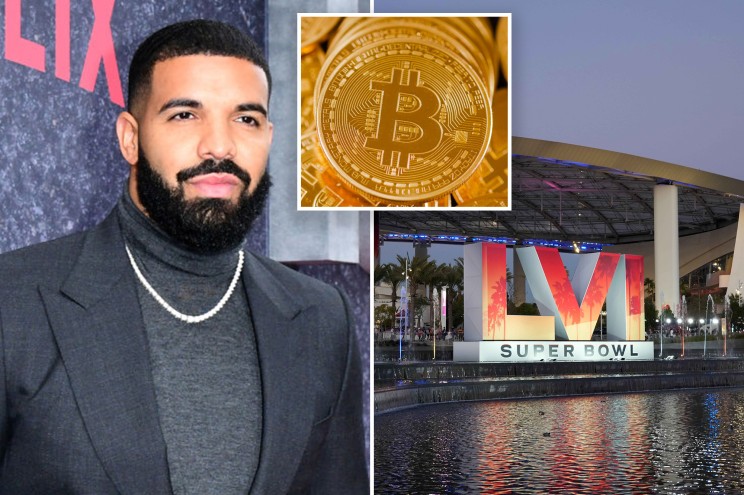 Drake is going all in on the Los Angeles Rams — and he’s placing his Super Bowl bet in bitcoin. The Canadian rapper put down a series of wagers totaling $1.3 million worth of the digital coin on Thursday. He’ll cash out if the Rams defeat the Cincinnati Bengals in Los Angeles on Sunday. The Rams are favored to win by 3.5 points. The “Hotline Bling” hip-hop icon wagered $393,000 on Rams wide receive Odell Beckham Jr. scoring a touchdown. He also bet the same amount that Beckham would have more than 62.5 receiving yards during the game. If Drake wins each of his bets, he stands to get paid $2.29 million based on the value of bitcoin at the time the wagers were placed, according to the online betting app Stake. The Toronto native posted a screenshot of his bets on his Instagram account. “All bets are in on the family,” Drake wrote, prompting Beckham to reply: “It’s time.” Beckham, the former Cleveland Browns and New York Giants star, signed with the Rams during the middle of this current season. At the time he joined the Rams, he agreed to take his entire NFL salary in bitcoin, which was worth an all-time record of $64,000 for each coin. Since then, however, the cryptocurrency nosedived, losing 50% of its value, though it has recovered somewhat in recent weeks. As of Friday, bitcoin was trading at $42,354.70 — down more than 2.6% from the start of the day. Cryptocurrency is expected to take center stage during the Super Bowl. Plenty of companies have reserved ad time on NBC to run crypto-themed commercials, prompting Madison Avenue observers to call it “the Crypto Bowl.” EToro, Crypto.com, and FTX will run commercials during the game while BitBuy, a Canadian crypto exchange, will be featured in an ad for the Super Bowl’s viewing audience north of the border. Americans will bet a record $7.61 billion on this year’s contest, according to estimates. That would mark an increase of more than $3.3 billion, or a whopping 78%, compared to the previous year.