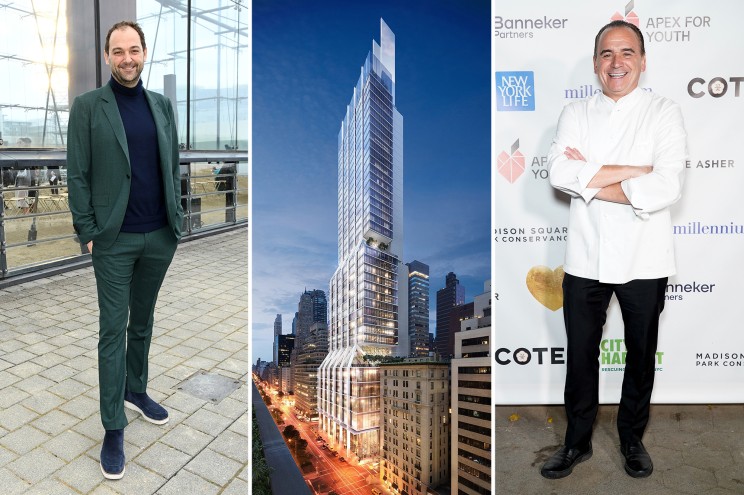 Park Avenue’s heavy-hitters won’t be noshing on plants, beets and seeds at the glamorous new office skyscraper at 425 Park Avenue after all. Eleven Madison Park’s vegan-cuisine chef Daniel Humm is out — and Jean-Georges Vongerichten is probably in — at L&L Holding Company’s nearly completed tower at East 54th Street, The Post has learned. The much-publicized deal with Humm collapsed late last year, sources said, although it was never announced or reported. Vongerichten confirmed that his company is having advanced talks with L&L chief David W. Levinson to take over the 14,000 square-foot ground-floor space that was to be for Humm. L&L developed the closely watched tower with co-equity partner and co-developer Tokyo Land Corp. and co-managing partner BentallGreenOak. “It’s amazing it never leaked out considering how high-profile all the players are, but they wanted to wait until the Vongerichten lease was done,” one source speculated. Levinson wouldn’t comment on the state of potential talks with Vongerichten. But he said he and Humm “decided to go our separate ways as friends” over Humm’s plans for 425 Park. “I give him tremendous credit for what he’s done,” Levinson said. “The world needs it. But we didn’t want a vegan restaurant at 425 Park Avenue. We want a place where our customers will come back several times a month. “I want [Humm] to succeed, but it was a no-brainer not to have a vegan restaurant at 425 Park Avenue,” Levinson said. Humm’s ground-floor restaurant, which was to be called Four Twenty Five, was a major selling point for the Norman + Partners-designed tower. It still appears on the building’s Web site. Humm was also to operate a tenants-only cafe on one of the office floors. Vongerichten sounded elated over the prospective expansion of his growing Manhattan empire, which will soon include the 55,000 square-foot Tin Building dining and retail complex at the South Street Seaport. “It’s a beautiful space and it will bring me back to my old neighborhood,” Vongerichten enthused — a reference to Lafayette, his first New York restaurant at the old Drake Hotel on East 50th Street. Ken Griffin’s hedge fund Citadel is the anchor tenant at 425 Park, with 331,800 square feet in the 670,000 square-foot, 47-story tower — which is the first full-block office development to go up on the avenue in more than a half century. Private equity firm Hellman & Friedman, Wafra Capital Partners and Medical Properties Trust also signed smaller leases at 425 Park. Office rents for some high floors at 425 Park have been reported as high as $300 a square foot. In December, L&L secured a $911.4 million debt package for the tower from a Blackstone-led consortium. L&L said at the time that the new financing would allow it to retire existing construction debt and complete remaining work. Humm’s company, Make It Nice, declined to comment on the situation. Humm’s EMP remains an in-demand dining destination despite having been chopped down by the New York Times from four stars to the equivalent of zero stars in a withering 2021 review after the paper stopped awarding stars due to the pandemic.