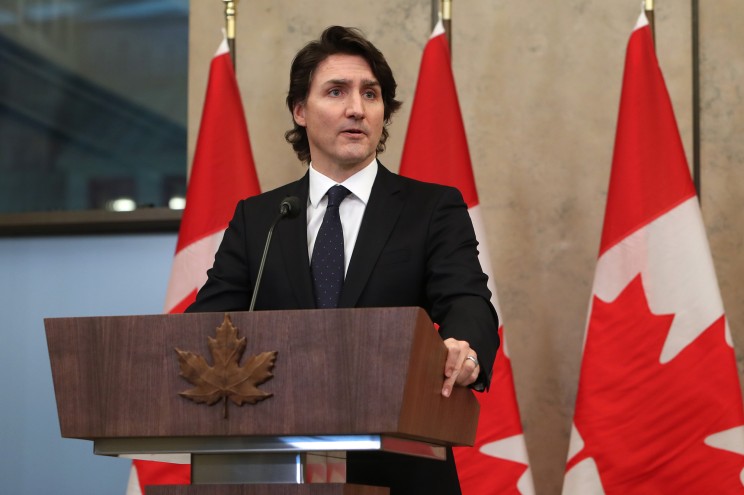 Elon Musk posted a satirical meme on Twitter that compared Canadian Prime Minister Justin Trudeau to Hitler. The Tesla CEO was responding to a Twitter post by the trade publication CoinDesk which reported that the Canadian government was cracking down on crypto transactions aimed at helping the truckers protesting vaccine mandates. Musk, 50, the world’s richest man, posted a meme featuring the likeness of Hitler. “Stop comparing me to Justin Trudeau,” the meme read. At the bottom, it said: “I had a budget.” The tweet was criticized by other Twitter users, one of whom wrote: “This is extremely poor taste, not a good look at all, there is [a] better way to make an argument.” The American Jewish Committee issued a statement condemning Musk’s tweet. “Once again, Elon Musk has exercised extremely poor judgment by invoking Hitler to make a point on social media. He must stop this unacceptable behavior,” the AJC said. “Musk may believe posting a meme comparing Justin Trudeau to a genocidal dictator who exterminated millions is an appropriate way to criticize policies he disagrees with. It is not. It never is.” The group added: “Musk must apologize and find other ways to voice his displeasure.” Trudeau has been criticized for invoking the Emergencies Act, which grants authorities the right to clear out protest encampments that have snarled traffic in the capital city of Ottawa for three weeks. Under the Emergencies Act, which has rarely been invoked during peacetime, the government can also seize truckers’ vehicles and freeze bank accounts, prompting accusations of overreach by Trudeau. Musk, a frequent critic of government lockdown measures and COVID vaccine mandates, has expressed support for the truckers. The fierce debate over the Canadian trucker protest has even led Trudeau to accuse his opponents of siding with fascists. Trudeau sparked outrage on Wednesday in the Canadian House of Commons when he accused a Jewish Conservative Party member of supporting “people who wave swastikas.” Trudeau made the comments during the daily questioning period in the lower chamber of the Canadian Parliament after facing criticism from Conservative MP Melissa Lantsman, who became the first Jewish woman elected to her party last October, Fox News reported. Musk has ties to Canada. His mother, Maye Musk, is a Canadian national. The Tesla boss moved with his family to Canada from his native South Africa at a young age. He then relocated to the United States as a young adult to pursue his studies at the University of Pennsylvania.