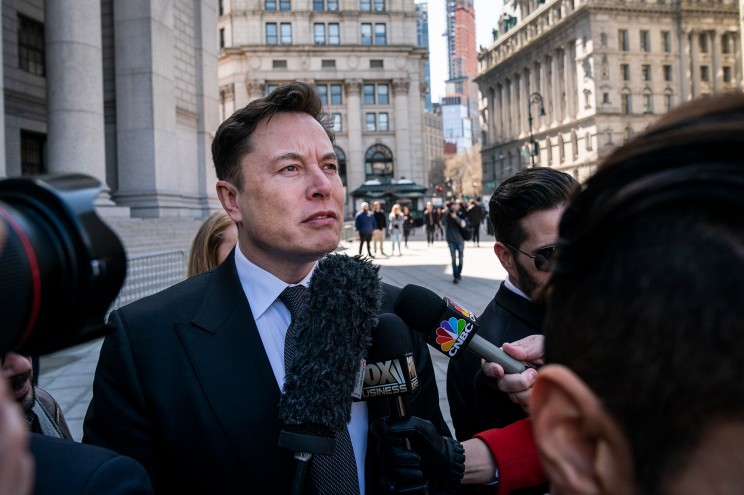 A lawyer for Elon Musk claims the feds have “gone rogue” under a 2018 truce that settled a flap over his controversial tweet about taking Tesla private — and claims that regulators have stiffed Tesla shareholders out of $40 million in the process. In a Thursday letter to a federal judge, Musk’s lawyer Alex Spiro said the Securities and Exchange Commission has failed to distribute to Tesla investors $40 million in cash penalties it had collected as part of a settlement over Musk’s now-infamous Aug. 7, 2018 tweet in which he claimed he had “funding secured” to take Tesla private at $420 a share. Attorneys for Musk — who said at the time the $420 price tag was a pot joke to impress his then-girlfriend, indie rocker Grimes — allege that the SEC has meanwhile continued to enforce terms of a consent decree in 2018 without the agreed-upon US court supervision. Earlier this month, Tesla revealed in its annual 10-K filing that the SEC — headed by hard-charging Chair Gary Gensler — served it with a fresh subpoena in mid-November, not long after Musk launched a Twitter poll over whether he should sell 10% of his stake in the company. Musk’s attorney didn’t mention the subpoena specifically in his Thursday letter, but griped that “the SEC has not once come before Your Honor to seek discovery concerning compliance under the consent decree.” “Instead, it has gone rogue, and unilaterally opened its own investigations,” Spiro wrote to US District Judge Alison Nathan. “The SEC has conducted these investigations wholly outside of this court’s supervision.” In addition to levying the $40 million in fines, the settlement forced Musk to vet any tweets about Tesla with a lawyer before sending them out. The settlement also stripped Musk of his chairman title at Tesla. The latter is a punishment that Musk has since ridiculed, instead giving himself titles like “Technoking” of the car company. Indeed, Musk’s lawyer didn’t mention the lost chairman title in the letter, instead focusing on the Twitter restrictions. The SEC “has been weaponizing the consent decree by using it to try to muzzle and harass Mr. Musk and Tesla, while ignoring its court-ordered duty to remit $40 million that it continues to hold while Tesla’s shareholders continue to wait,” Spiro added. The US District Court in southern New York already has taken notice of the failure to distribute the $40 million. Judge Nathan on Dec. 21 noted that the court in May had appointed Rust Consulting to dole out the cash, ordering the firm to file quarterly status reports. The court hadn’t received any to date, Nathan said, ordering that one be filed by Jan. 7. As of Thursday, there was still no record of a report being filed in the court docket. “The SEC seems to be targeting Mr. Musk and Tesla for unrelenting investigation largely because Mr. Musk remains an outspoken critic of the government,” Spiro, a partner at New York-based law firm Quinn Emanuel, wrote in the letter. “The SEC’s outsized efforts seem calculated to chill his exercise of First Amendment rights.” The court-administered decree has no expiration date. Last year, the SEC reportedly said Musk had broken his end of the bargain by tweeting without oversight about solar roof and car production levels. Musk’s lawyers, meanwhile, countered in the Thursday letter that the SEC broke rules that called for it to devise a plan no more than 60 days after receiving the settlement funds on how to turn over the assets. The SEC has held the fines — $20 million from Tesla and $20 million from Musk himself — for nearly 1,200 days, the letter claims, and still hasn’t announced a distribution plan. As first reported by The Post, Musk earlier this month in a California shareholder suit claimed that his buyout tweet was “entirely truthful” and that Saudi Arabia’s sovereign-wealth fund was ready to fund the deal, pushing back against investors who have alleged it amounted to fraud, according to a federal court motion. If Judge Nathan decides that both sides broke the consent decree, the agreement likely would be thrown out and Musk would be free to tweet as he likes – without a review from the Tesla legal department, experts said. Former SEC Enforcement Division Senior Counsel David Chase – who is not involved in the Musk case – said there’s some merit to Musk’s allegations that the SEC hasn’t abided by the terms of the consent decree. Most SEC consent decrees are not done through the courts and the SEC agrees to make its best efforts to distribute settlement money. In this case, the SEC said in court documents that it “intends to distribute these penalties to affected investors.” “I think this gives Musk a little more ammunition,” Chase told The Post.