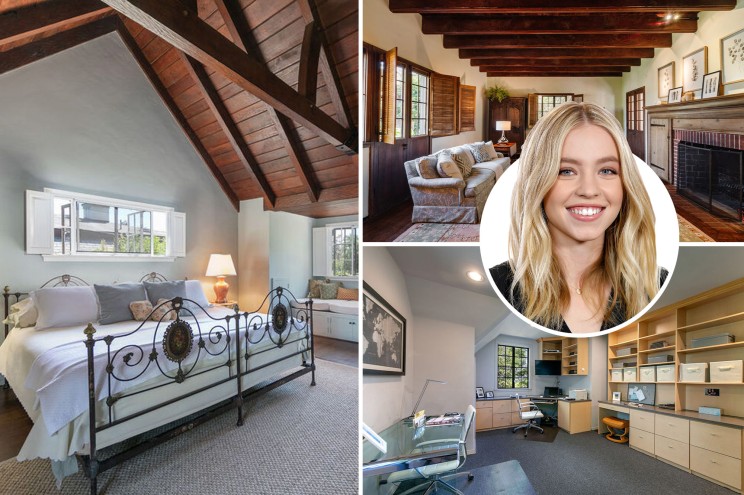 Sydney Sweeney’s professional career has taken off, and what better way to celebrate than with a “rare” $3 million home that has hit the market for the first time in nearly 50 years? The 24-year-old actress, who stars in the hit series “Euphoria” playing Cassie Howard, and HBO’s widely acclaimed “The White Lotus,” purchased her first home on Nov. 2, 2021, according to Dirt. Located in the Westwood neighborhood of Los Angeles, the home was last up for sale back in 1972 when the former owners paid only $85,500 for the house, property records show. Made up of five bedrooms and four bathrooms, the Tudor traditional-style home was built in 1933 and was pegged as a “rare offering” Situated atop the hillside, photos show an outdoor brick fireplace and a front porch with view of the golf course, the previous listing notes. Speaking to the Associated Press, which named her 2021’s “AP Breakthrough Entertainer of the Year,” Sweeney revealed that she had been trying to land big roles while simultaneously processing her parents’ divorce. “I always thought that when I turned 18, I’d have all this money and I’d buy back my parents’ house and put them all back together again. And I never was able to, and I never did,” she said. “So now being able to be in a house is such an incredible, humbling, amazing accomplishment that I still can’t believe I was able to pull off.” Sweeney had also starred in Quentin Tarantino’s “Once Upon a Time in Hollywood,” in which she played a member of the Manson family. During the pandemic, Sweeney also launched her own production company, Fifty-Fifty Films. “I had the time during COVID, and … I was reading all these books. I was like, ’Well, does anyone have the rights to them?’” Sweeney said. Her first project under the production will be starring as Jessica Goodman’s prep-school thriller, “They Wish They Were Us,” retitled “The Players Table.” Sweeney’s success, she explained, has offered her the opportunity to help her family. “I was able to bring my grandmother to Paris and sit front row the Balmain fashion show and she’d never traveled that far. She hadn’t been to Europe, nothing,” Sweeney said. On another trip she took her cousins to Italy’s luxurious Amalfi Coast. “We grew up bumming on the lake and not taking showers and no TV and no internet,” she added. “A lot of my family, we did not come from much of anything, and being able to give them a little slice of this world, that’s what means the most to me… Those are the biggest pinch-me moments.”