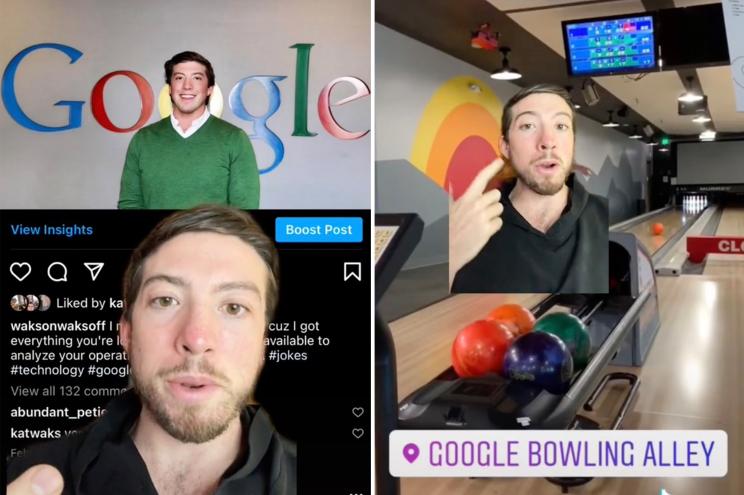 “Work hard, play hard?” Ken Waks, a former Google employee, claims he knows the “dark reason” for the company’s notoriously generous perks: to get staff “to work more for less.” In a now-viral TikTok that has amassed more than 6 million views, Waks detailed the best perks the tech giant has to offer, including three meals a day, a shuttle, pets allowed in the office, baristas to make coffee and even their own bowling alley. Who would want to leave? But that’s the point, 29-year-old Waks said. Google wants its employees to stay longer and work harder. “At Google, you get three square meals a day, for free, but dinner would start at 6 p.m. or 6:30 p.m. so you had to stay late working more to get the free food,” he said in the clip, which has over one million likes. The benefits, which spanned “throughout the day,” included a shuttle that ran from 6 a.m. to 10 p.m. and had wifi on board, ensuring employees could work even on the go. The pet-friendly offices, he added, allowed the staff to bring their dogs along so owners “would not leave the office to go take care of their dogs.” “These companies take some of the smartest people in the world, take away all ‘life problems’ so they can work harder on selling you ads,” he explained. The Post has reached out to Google for comment. But Waks wasn’t content with the copious amount of benefits at his fingertips, complaining about not making a commission on sales until he hits $12,000 every month. “[My director] told me, ‘That’s when we break even on you for the office, for the snacks, for the perks that we give you,’” Waks recalled. “I would rather not have those perks and I’d rather just have a higher salary.” But some viewers disagreed, saying the perks aren’t as “dark” as Waks made it seem. “I would rather have the perks. I work hard either way,” one user rebutted. “Not having to worry about these things is a huge stress relief and I don’t pay taxes on it.” “How can you complain about those ‘perks’?” another commented. “Try working in healthcare or in retail, or the food industry, go check out their perks, yeah it’s COVID.”