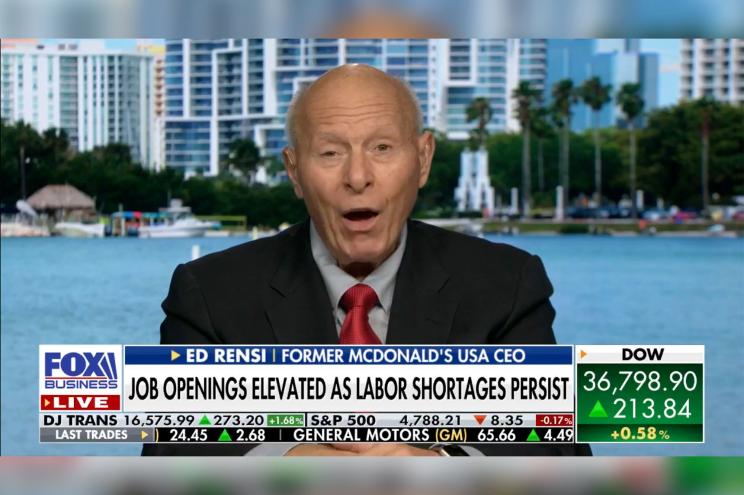 Former McDonald’s CEO Ed Rensi said companies have “no business” being in politics – and has now launched a conservative initiative to fight “woke” corporate policies. The 78-year-old — who led the Golden Arches from 1991 to 1997 — speaheaded The Boardroom Initiative to push back against boardrooms of American corporations that have become too politicized, Fox Business reported. “Corporations have no business being on the right or the left because they represent everybody there and their sole job is to build equity for their investors,” the brainchild behind Chicken McNuggets told Fox Business. The initiative’s mission is to defend shareholders and employees of public companies from “woke” policies and to ensure corporate accountability, the outlet said. Rensi told Fox Business that while he doesn’t consider himself politically active, he wants to fight for shareholders who he believes are being negatively impacted by progressive policies. The Boardroom Initiative comprises three conservative advocacy groups –The Job Creators Network, which was founded by Home Depot co-founder Bernie Marcus, The Free Enterprise Group and Second Vote. The Free Enterprise Project owns about 2,000 shares of Bank of America, enabling the group to be able to advocate for changes on behalf of other shareholders, Fox Business reported. Bank of America is among multiple major US companies to come under fire for implementing training sessions for their workers that incorporate the progressive teaching concept, Critical Race Theory. “Time and again, US companies have tried to address social problems by implementing divisive, controversial programs that have only increased conflict,” Richard Morrison, a senior fellow at the libertarian Competitive Enterprise Institute, told Fox Business. “Hopefully, The Boardroom Initiative is the beginning of a new era in corporate America in which extremes of ideological politics are set aside so that everyone can work on creating value for both customers and investors,” he added.