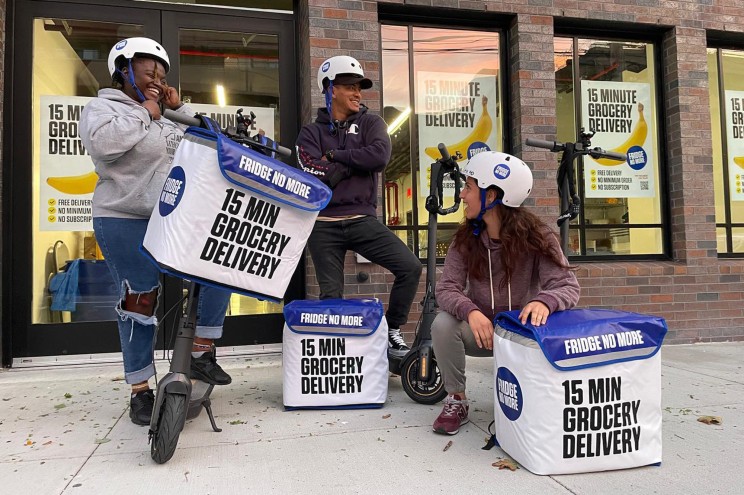 A herd of new grocery startups have spent the last year wooing New Yorkers with deep discounts and lightning-fast deliveries of everything from ice cream to toilet paper — but a real estate recovery and political backlash could mean their push is coming to an end. Apps like GoPuff, Gorillas, Jokr and Getir poured into the city in 2021, promising grocery deliveries in as little as 10 minutes from small, local hubs. Often, these “dark stores” amounted to storefronts with blacked-out windows that were formerly used by neighborhood delis, boutiques and restaurants that shuttered during the pandemic. With New York’s economy in the tank during late 2020 and early 2021, startups were able to score sweet short-term deals on spaces — but things are now changing as rents begin to rise and local politicians question whether the apps are turning once-bustling streets into warehousing and delivery zones. “They’ve run into a number of obstacles between rising rents, potential zoning issues and landlords who are not excited about them as tenants because they don’t add anything to the neighborhood,” Jeffrey Roseman, vice chairman of commercial real estate advisory Newmark Group, told The Post. The end of the gold rush? Amid the desolation of the pandemic — which left many well-to-do New Yorkers cowering inside and ordering everything online — fast-delivery apps scooped up 150 to 200 retail spaces since charging into the city about 12 months ago, according to Solomon Sharaby, a broker with KSR, the real estate company that handled Jokr’s expansion in New York. “There was a lot of vacant space,” Sharaby said. Nevertheless, many of the deals the apps signed were unusually short two-year leases with cancellation options for both the landlords and tenants, brokers say. “The landlords wanted the ability to cancel the lease because it wasn’t their ideal tenant and the delivery companies wanted a way out in case they couldn’t make it in the market,” real estate broker Yoni Hader told The Post. As the economy improves in the city, more landlords are spurning deals with “dark stores,” which some landlords say say don’t contribute to valuable foot traffic and can annoy neighbors with their throngs of e-bikes. “A store with a sign that’s not open to the public and the delivery bikes gathered outside is a challenge,” broker Brian Katz of Katz & Associates told The Post. “Landlords are resisting this use, especially in residential neighborhoods.” Adding to the complications, some delivery apps, which have raised billions of dollars in venture capital during the earlier days of the pandemic, are starting to run out of money. One lesser-funded app, 1520, launched in January 2021 and shut down by December after running out of funding. Another, Tiger Global-backed Jokr, is reportedly looking to sell off its New York operations to a competitor, The Information reported in January, though Jokr denied the report. “Jokr has no plans to sell the NYC business,” spokesperson, Laura-Lucia Wehner told The Post in a statement. “We are very well funded, and the strong growth and positive unit economics that we see in the majority of our business continues to excite our existing as well as many new and potential investors.” Not one of the apps, which primarily use full-time employees rather than gig workers, appears to currently be profitable. Regulatory trouble New York politicians are adding to the apps’ woes, fretting about their impact on local businesses and questioning whether they’re flouting zoning laws and other city rules. Many of the apps have secured spaces zoned for retail businesses — not warehouses — but are effectively operating warehouses anyway, according to Upper West Side councilwoman and former Manhattan borough president Gale Brewer. “I don’t see how [dark stores] could be legal in a retail area,” Brewer told The Post. “They’re warehouses.” She said she’s asked the city’s Department of Buildings and Department of City Planning to investigate whether delivery apps are violating zoning laws and could also introduce legislation around the issue. Christopher Marte, a councilman representing Downtown Manhattan, likewise told The Post he’s helping to “add pressure on the zoning front” against dark stores. Brewer and Marte said they had visited locations by competitors like Getir and Gorillas and were either not able to enter or not able to buy items with cash, violating a New York City law that requires retailers to accept cash. Brewer also raised concerns about some dark stores’ window tints violating city rules. “There are lots of issues here,” Brewer said. Philadelphia-based Gopuff, which opened more than 20 locations in the Big Apple since October, has apparently tried to dodge zoning concerns by opening small retail zones that are open to the public. The Post visited one of those stores, on Rivington Street in the Lower East Side, last week. The store’s posted hours showed it was currently open — but no employees were attending the store, which appeared to consist of two refrigerators stocked with fruits, vegetables, juices and yogurt. The grocery items appeared to not have price labels, which Brewer points out are required under New York City law. The Rivington location consists largely of rows and rows of shelves that are only accessible to company employees. Still, a GoPuff spokesperson insisted to The Post that the company’s New York locations are “are not ‘dark stores’ or ‘warehouses’” but rather “retail locations that support both walk-in customers and pick-ups for deliveries.” The customer experience will evolve over time, the spokesperson added. “If it looks like a warehouse, if it sounds like a warehouse, if no one’s there to sell you anything, it pretty much is,” Marte said. He called Gopuff’s claims that its New York sites are “retail locations” a “p.r. move.” Roseman, the vice president from Newmark, said that companies like GoPuff are scrambling to meet city requirements because having a retail component “wasn’t their business model before they arrived in NYC.” “They are all trying to figure out ways not to be deemed a warehouse,” he said.