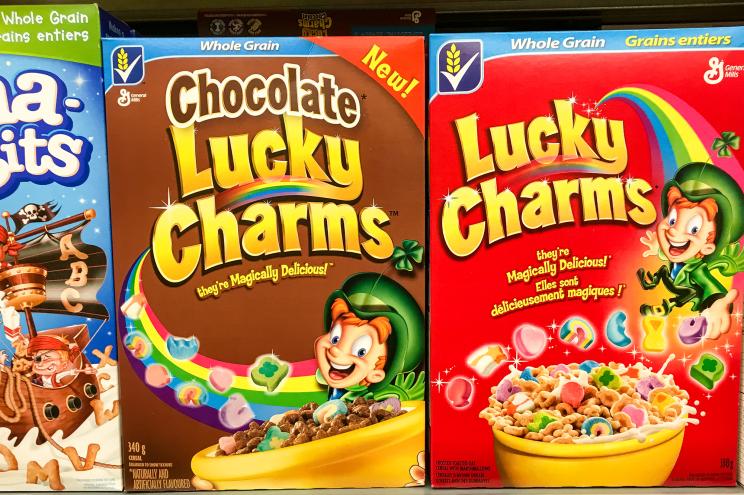 The feds have enlisted multiple states to assist an investigation of reports of sickness caused by Lucky Charms — and meanwhile customers are complaining that the sugary breakfast cereal’s manufacturer, General Mills, has had a lame response. The Food and Drug Administration has tapped at least four states — New York, Michigan, Kansas and Arkansas — whose health departments are now are contacting and interviewing consumers who have reported bouts of vomiting and diarrhea after eating Lucky Charms, according to customers and state officials. The New York Department of Health said it has received eight complaints “potentially associated with Lucky Charms cereal” adding that it is “in communication with the FDA to help inform their investigation,” a spokesperson told The Post, declining to comment further. In Coldwater Mich., resident Chris Sours said a state official from Branch Hillsdale Health Department reached out on Friday, asking him about his and his three year-old daughter’s four-day bout with diarrhea and vomiting after eating Lucky Charms last month. A state health official is slated to pick up what’s left in the box, he said. “When you go to the grocery store and buy something you should be able to eat it safely and not have to deal with what happened to us,” Sours told The Post. He bought his Lucky Charms at a local Walmart and said, “I’m done with that Walmart. I haven’t been back since.” Walmart did not immediately respond for comment on whether it’s customers have complained about the cereal. An FDA spokesperson said the agency has received more than 100 complaints about Lucky Charms this year through April 12. “The FDA takes seriously any reports of possible adulteration of a food that may also cause illnesses or injury,” the agency said in a statement to The Post, adding, “Complaints of a less serious nature or those that appear to be isolated incidents are monitored and the information may be used during a future inspection of a company to help the FDA identify problem areas in a production plant. The complaints are also discussed with company management during these inspections.” Meanwhile, more than 4,500 have reported becoming ill after eating Lucky Charms, according to iwaspoisoned.com, a website that tracks food borne illnesses. Most of the complaints rolled in after The Post first reported on April 1 that the site had spotted a pattern of the cereal making people sick. The FDA was investigating the matter by April 5. A Fayetteville, Ark. resident named Karen, who asked that her last name not be used, told The Post she came down with violent diarrhea after a midnight snack of the sugary cereal on March 31. After she promptly complained to General Mills, she says she got a letter apologizing that “our product did not meet your expectations, along with two $7 coupons redeemable for the company’s cereals, which also include Honey Nut Cheerios, Trix and Coca Puffs. “I’m like, you’ve got to be kidding me,” she told The Post. “I was irritated and I thought, ‘Honestly if this their response, they are not going to do anything.’” The Kansas Department of Health and Environment also confirmed that it is working with the FDA in its investigation and the Arkansas health department has also begun its outreach to affected residents. General Mills has insisted that the illnesses are not linked to its cereal and that it has investigated its manufacturing facilities. “We have investigated claims from a variety of sources — those made on the internet, through media inquiries, and directly to us and the FDA,” the company said in a statement. “To date, we have not found any evidence of consumer illness tied to our products.” Karen, the Arkansas resident, said she has no doubt in her mind that the cereal, known for its colorful marshmallows and its leprechaun mascot, was the culprit of her illness. That’s because she doubted it the first time around and bought a second box. “I wondered whether it was the cereal, but I got the same reaction the second time,” she said. “I find it funny that they did an internal investigation and they didn’t find a link.”