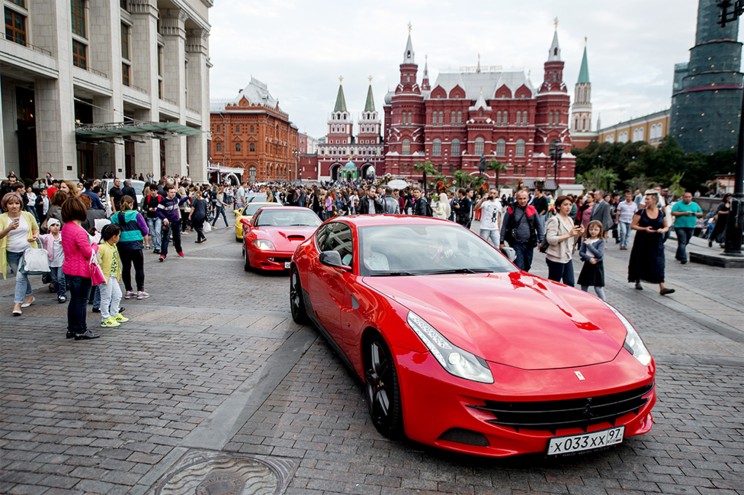 Ferrari and Lamborghini will no longer manufacture luxury sports cars for sale in Russia in protest of that country’s invasion of Ukraine. The Italian companies announced the suspension of their Russian exports earlier this week. “Given the ongoing situation, Ferrari has taken the decision to suspend the production of vehicles for the Russian market until further notice,” Ferrari said in a statement. The company also announced that it would be donating $1.1 million to support Ukrainians in need. The money will be used to help absorb Ukrainian refugees who are forced to relocate to Italy. “Ferrari stands alongside everyone in Ukraine affected by this ongoing humanitarian crisis,” Ferrari CEO Benedetto Vigna said. “While we hope for a rapid return to dialogue and a peaceful solution, we cannot remain indifferent to the suffering of everyone affected.” “Our thoughts and support go out to them. We are playing our small part alongside the institutions that are bringing immediate relief to this situation.” Shares of Ferrari were down more than 3.6% in Wall Street trading on Thursday. Ferrari operates two dealerships in Russia. Worldwide, the company has a total of 172 dealerships. Last year, the Russian market accounted for fewer than 100 vehicles out of the 11,000 sold, according to Bloomberg. Ferrari’s rival, Lamborghini, echoed the sentiment, releasing a statement which read: “In light of the current situation, business with Russia has been put on hold.” “Lamborghini hopes for a swift end of the hostilities and a return to diplomacy,” the company, which is a subsidiary of Volkswagen, said. VW’s stable of luxury automotive brands includes Porsche and Bentley. Since the Russian invasion of Ukraine began in earnest two weeks ago, at least 10 of the world’s largest automobile manufacturers have announced they were halting operations in Russia. Ford, Renault, Volvo, Toyota, Honda, General Motors, BMW, Volkswagen, Jaguar Land Rover, Porsche, Bentley, Aston Martin, and Mercedes-Benz are among the auto firms that have either halted manufacturing at its Russian plants, suspended exports to Russia, or both. Renault, the French car maker, lost more than a third of its market capitalization after the United States and the European Union imposed hard-hitting sanctions on the Russian economy. The company has extensive business ties to Russia, which accounts for some 10% of Renault’s revenue. Russia is the second-largest buyer of Renault cars. VW, whose sales to Russia represent 2.4% of all of its global deliveries, was forced to halt production both within Russia and in Europe, including of its Porsche brand. Public opinion, which is overwhelmingly opposed to Russia’s military assault on Ukraine, has forced the hand of nearly 300 companies across various sectors of the economy to pull up stakes from Russia.