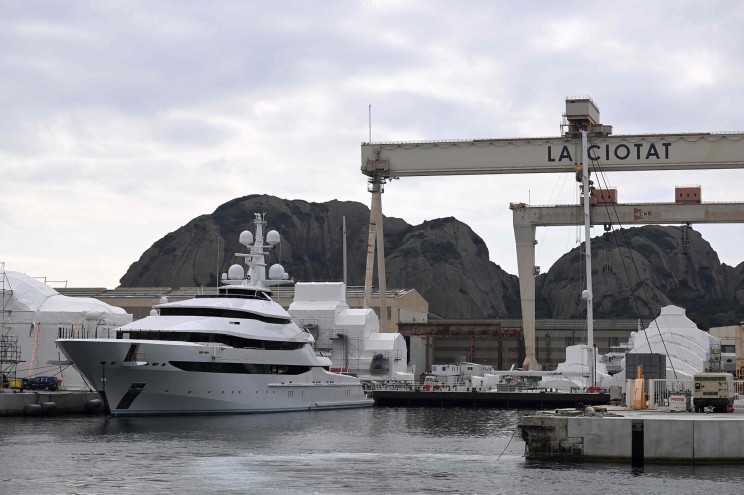 French authorities seized a $120 million superyacht owned by Russian oil magnate Igor Sechin on Wednesday – the latest sign of an escalating crackdown on Russia’s oligarchs in response to the Kremlin’s unprovoked invasion of Ukraine. French customs officials took control of the luxury vessel as it attempted to leave the port of La Ciotat in southern France – in violation of European Union sanctions targeting Sechin and other Russian oligarchs. “Thanks to the French customs officers who are enforcing the European Union’s sanctions against those close to the Russian government,” France’s Finance Minister Bruno Le Maire tweeted Thursday alongside a letter detailing the yacht seizure. The superyacht arrived at the port in early January for repairs and was not scheduled to depart until April 1 as it underwent repairs. According to the letter, the 280-foot vessel was “taking steps to sail off urgently, without the repair works being over” – prompting customs officials to take control. The massive boat – called “Amore Vero” – is technically owned by a company in which Sechin is the majority shareholder, according to France’s finance ministry. The yacht was built by Oceanco and completed in 2013. The Amore Vero is one of the largest ships of its kind in the world and won “best yacht design over 50 meters” at the World Yacht Trophies, according to Oceanco. The yacht has a swimming pool on its main deck that converts to a helicopter platform, as well as a sundeck with a jacuzzi and various other ritzy features. A close ally of Putin, Sechin is the former deputy prime minister of Russia and current CEO of Russian oil giant Rosneft. The European Union described Sechin as one of Putin’s “most trusted and closest advisors, as well as his personal friend.” Un yacht appartenant à un oligarque russe a été saisi. Merci aux douaniers français qui font respecter les sanctions de l’Union européenne à l’encontre des proches du pouvoir russe. pic.twitter.com/AZVzmlet2P— Bruno Le Maire (@BrunoLeMaire) March 3, 2022 As Page Six reported, a growing number of superyachts owned by Russian billionaires have fled to the Maldives and Seychelles as authorities in the US and abroad crack down on the wealth of oligarchs. The international community is attempting to ratchet up pressure on Putin’s allies as part of its effort to end Russia’s offensive in Ukraine. Yachts are just one target of the crackdown. On Wednesday, Russian billionaire Roman Abramovich said he would sell Premier League club Chelsea as he faces mounting international pressure. President Biden signaled his administration would aggressively pursue assets held by Russian oligarchs during his State of the Union address. “We are coming for your ill-begotten gains,” Biden said.