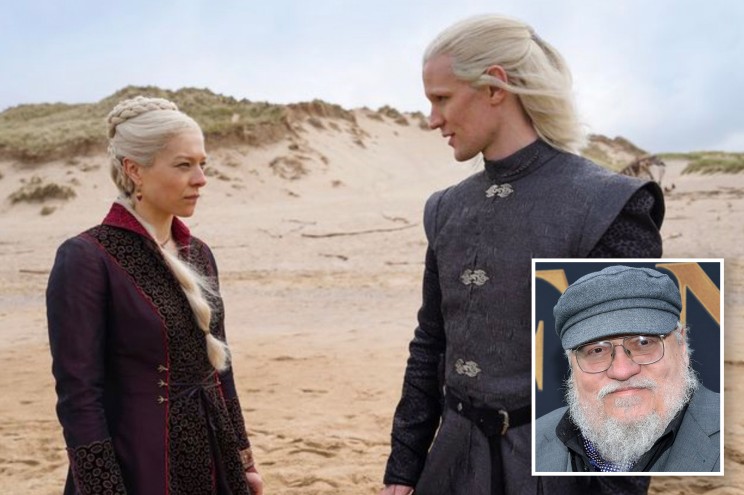 George R.R. Martin has announced that “Game of Thrones” prequel “House of the Dragon” has officially wrapped filming — and he’s thrilled with the results. “Exciting news out of London – I am informed that shooting has WRAPPED for the first season,” he wrote in a blog post on Thursday. “Yes, all ten episodes. I have seen rough cuts of a few of them, and I’m loving them….the writing, the directing, the acting all look terrific.” Premiering at an unannounced date this year on HBO Max, “House of the Dragon” is based on Martin’s book “Fire & Blood” and is set around 200 years before the events of “Game of Thrones,” centering on members of House Targaryen — Daenerys’ and Jon Snow’s ancestors. So, yes, that means that there will be silver wigs galore and smooching between blood relatives. It will center around Prince Daemon Targaryen (Matt Smith, “The Crown,”), who is the king’s brother; King Viserys Targaryen (Paddy Considine); Alicent Hightower (Olivia Cooke); Princess Rhaenyra Targaryen (Emma D’Arcy), who is the king’s daughter; and Lord Corlys Velaryon (Steve Toussaint), known as the Sea Snake. In case you were weirded out by the sibling incest between Jaime and Cersei Lannister in “Game of Thrones,” this story takes a major turn on that front and, instead, has uncle and niece incest between Daemon and Rhaenyra. The plot will focus on the Dance of the Dragons — the infamous civil war that took place between siblings Aegon II and Rhaenyra over the throne after the death of their father Viserys I. (Casting for Aegon hasn’t been announced yet). After “Game of Thrones” ended to mass audience controversy and scorn, Martin firmly stated that he loves this show. As for a premiere date, although it’s coming in 2022, Martin made it sound like it could be closer to the end of the year. “So when will you see it, you ask?” he continued in his blog post. “When will the dragons dance? I wish I could tell you. Lots of work remains to be done, as I said, and covid makes planning difficult. This spring? Unlikely. Maybe summer? Could be. Fall? Who knows? You’ll know when we do.”