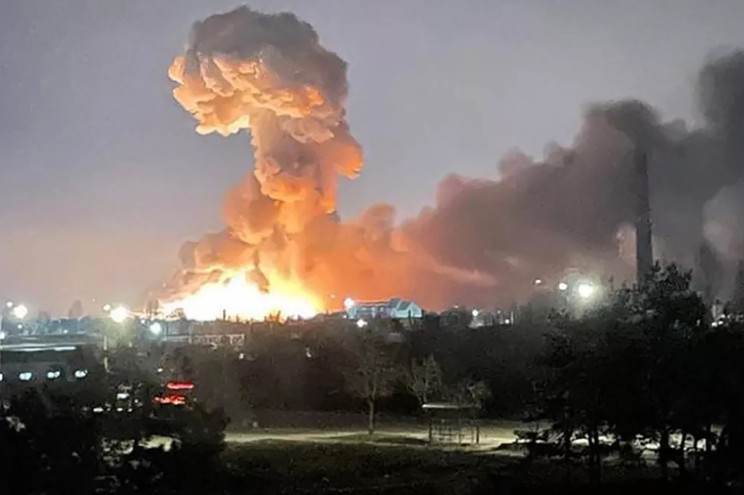 The Russian invasion of Ukraine is likely to snarl global trade even further, while sending gas prices soaring and stock markets into correction territory, analysts say. Global markets tanked on Thursday as Americans woke up to images on their television screens showing Russian forces moving deeper into Ukraine. The Biden administration has vowed to “aggressively enforce” stringent sanctions against Moscow in retaliation for its military assault on its neighbor to the west. An invasion of Ukraine, which has been dubbed “the breadbasket of Europe” because it is a major producer of wheat, barley, corn and rye that is consumed largely by Europe, may upset supply chains even further. This could also affect countries in the Middle East and Africa that also import Ukrainian wheat and corn. Ukraine is also China’s top supplier of corn. Even before the invasion, global wheat and corn prices have soared since the beginning of the year. Wheat futures have risen some 12% while corn futures skyrocketed 14.5% since the start of 2021. “Even though harvesting season is still a few months away, a prolonged conflict would create bread shortages [and increase consumer prices] this fall,” Alan Holland, the CEO of sourcing technology company Keelvar, told CNBC. “Rising food prices would only be exacerbated with additional price shocks, especially if core agricultural areas in Ukraine are seized by Russian loyalists,” said Per Hong, senior partner at consulting firm Kearney. Both Russia and Ukraine are also major exporters of metals and other commodities. “Russia is a big exporter of oil, natural gas, and palladium,” Webull CEO Anthony Denier told The Post. “It also exports a lot of other commodities, so I would expect sanctions to affect commodity prices and that means higher gas prices in the US.” Analysts say that the escalating crisis in Eastern Europe will have a negative effect on energy prices. Crude oil surpassed $105 a barrel on Thursday — the first time it reached triple digits since 2014. Russia is a major exporter of oil and natural gas, particularly to the European market. Americans who were already feeling the pinch at the pump will likely scale back spending on other goods. Experts have warned that a massive Russian invasion of Ukraine could send gas prices soaring to past $7 a gallon in some states. “Higher energy prices mean less consumer spending on other goods and services,” Bill Adams, chief economist for Comerica Bank, told The Post. “A drop in US exports to the EU is likely too.” American exports to the continent comprise 2% of US GDP, so despite the “new growth head winds” brought about by the crisis in Ukraine, the economy doesn’t appear to be in danger of a recession. “US growth this year should be supported by less drag from the pandemic and consumers dipping into the [more than] $2 trillion in savings they accumulated since the start of the pandemic,” Adams said. “These factors will likely matter more for the US economy than the Russia-Ukraine conflict.” Economists are taking a keen interest as to what effect the crisis will have on US monetary policy. The Federal Reserve is expected to announce several interest rate hikes in a bid to cool down soaring inflation. The rate of inflation in January was 7.5% — a high not seen in four decades, according to federal data. Analysts do not anticipate that the crisis will be prolonged or that Americans will be dragged into war. “While there may be some additional volatility in the short term, these dislocation events historically present opportunities, as long as recession doesn’t follow,” Cliff Hodge, chief investment officer of Cornerstone Wealth, told The Post. “At this stage recession is not a concern.”