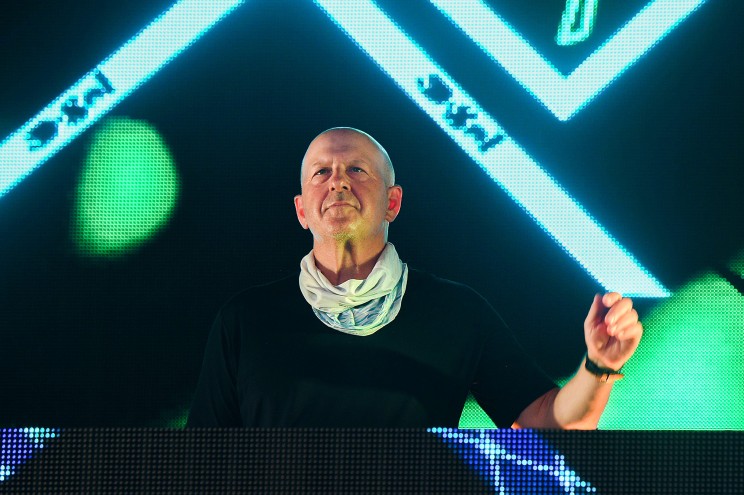 Sports Illustrated’s star-studded Super Bowl party included a guest performance by Goldman Sachs CEO David Solomon, the Wall Street titan who has a side hustle as a DJ. Hours before kickoff, Solomon performed at the party at Century Park in Los Angeles, appearing alongside well-known artists such as Kygo and Jack Harlow. The Goldman boss’s set ran from 11 p.m. to midnight. “He shows up with a backpack, in T-shirt, jeans, sneakers,” said Michael Heller, co-founder of Talent Resources Sports, which co-hosted the party alongside Sports Illustrated’s parent company, Authentic Brands Group, according to Bloomberg. “After dark, he’s a different person, so free-spirited,” Heller added. Notable figures in attendance at Sports Illustrated’s bash included Amazon founder Jeff Bezos and billionaire investor Josh Harris – the latter of whom reportedly quipped that Solomon’s gig didn’t look too difficult. High-profile DJ sets are nothing new for Solomon, who performs under the name DJ D-Sol. The longtime executive previously performed at Sports Illustrated’s Super Bowl party in 2020. Solomon has appeared at New York City venues such as the Hammerstein Ballroom as well as clubs like Up & Down and Libation. As the Post previously reported, Solomon’s side gig isn’t always popular with Goldman Sachs employees. Last year, Solomon drew internal criticism after he performed at a festival just days after Goldman Sachs banned unvaccinated employees from entering its officers and enacted strict mask and testing rules. In a December podcast appearance, Solomon said his pastime “helps him relax.” “I have this analytical side of my mind that helps me with my biz professional career,” Solomon told The Sound of Success with Nic Harcourt”. “But I haven’t had a lot of opportunities to stimulate the artistic creative side of my brain and it makes me feel good. A source told the Post in December that many Goldman Sachs employees have come to accept –and even appreciate – his DJing hobby. “People respect commitment and he works hard at it,” the source said.