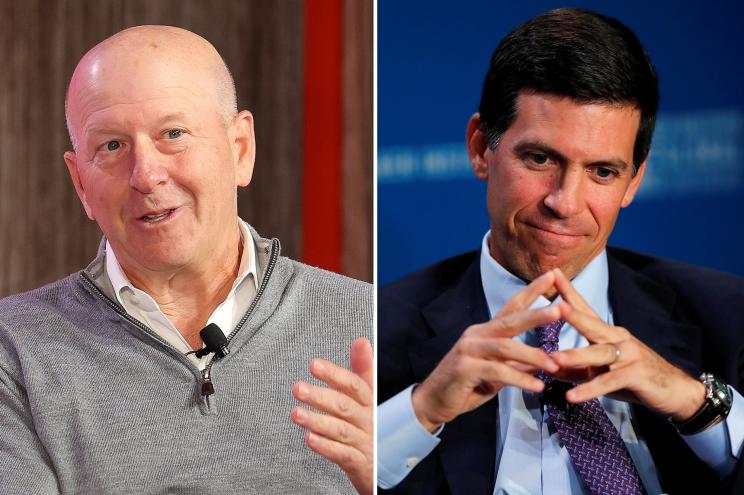 Goldman Sachs’ plan to pay a $30 million one-time bonus to Chief Executive David Solomon and a $20 million bonus to Chief Operating Officer John Waldron is “excessive,” proxy adviser Glass Lewis argued Friday. The shareholder advisory firm told Goldman shareholders they should vote against the executive pay package that contains the one-time gift bonuses. “We are concerned about special, one-off grants to the CEO and COO,” said the Glass Lewis note to shareholders that was reported by the Financial Times said. “Such awards have the potential to undermine the integrity of a company’s regular incentive plans, the link between pay and performance or both.” Goldman has contended that its compensation will “drive long-term shareholder value creation” and “ensure leadership continuity over the next five-plus years.” The multi-million dollar stock awards won’t be paid out until October 2026. Glass Lewis said when shareholders are asked on April 28 whether to approve the pay packages, they should say no. So-called say-on-pay votes at publicly traded companies are strictly advisory, but if a company’s shareholders vote against a pay package, it can be seen as a black eye. “We believe that long-term incentives should encourage executives to achieve steady and sustainable growth rather than what may amount to relatively brief spikes in performance,” Glass Lewis said. Goldman Sachs did not immediately respond to request for comment. At Goldman, Solomon’s total pay includes an annual base salary of $2 million and a variable compensation of $33 million, 70% of which is in the form of goal-based stock compensation or restricted stock units. Solomon’s compensation is in line with his competitors. James Gorman, CEO at Morgan Stanley, also raked in the same amount — $35 million — for 2021. JPMorgan Chase CEO Jamie Dimon’s 2021 total compensation clocked in at $34.5 million. Solomon’s 2021 payday was double the $17.5 million he made in 2020 — Solomon was docked after Goldman admitted wrongdoing in the 1MDB scandal that plundered the Malaysian sovereign wealth fund. Meanwhile, bank stocks have fallen sharply so far this year even after bumper results on the back of a banner year for mergers-and-acquisitions. That’s because they also reported sharply higher expenses — in large part because of the fat pay packages they’re doling out in a tight labor market.