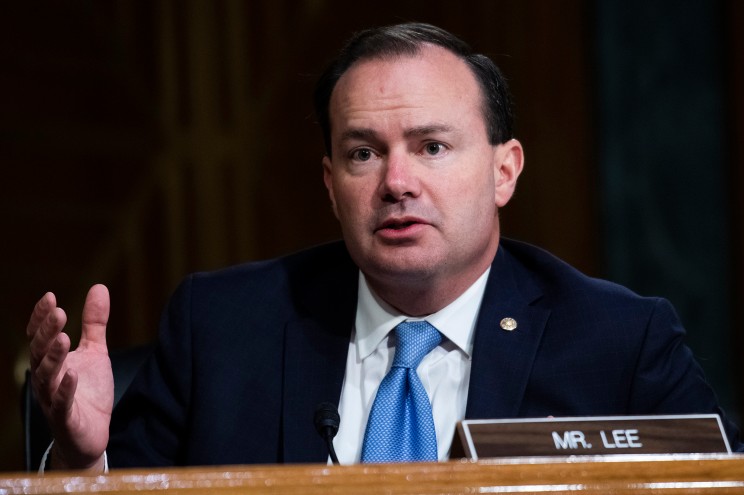 Lawmakers from both parties are set to introduce bills that could break Google’s stranglehold on the advertising business and start to chip away at Big Tech monopolies, The Post has learned. Sen. Mike Lee (R-UT) is set to introduce a bill within weeks that would bar Google and other large tech firms from controlling multiple parts of the online ad supply chain. And while Lee’s bill appears to be aimed squarely at Google, it could also affect Facebook and Instagram parent company Meta, which makes the bulk of its revenue from advertising. The bill would put an end to a company’s ability to act as a broker for a buyer or seller of ad space while simultaneously owning the exchange where ad space is traded, a source with knowledge of the proposed legislation said. Passage of the bill would represent a potentially multibillion-dollar blow to Google’s current model, which critics say allows the tech giant to charge unfairly high commissions. Critics say that Google often plays the roles of buyer, seller and middleman in the online ad market — a position that one of the tech giant’s own employees compared to Goldman Sachs owning the New York Stock Exchange, according to an ongoing lawsuit from Texas and 14 other states. “A $100,000 stock trade will cost you a few dollars in exchange fees paid to the NYSE,” Notre Dame antitrust law professor Roger P. Alford said during a Senate hearing last month. “But a $100,000 ad campaign will cost you $20,000 in fees paid to Google’s exchange.” Lee’s bill would also give Google a fiduciary duty to its advertising clients, similarly to how a financial adviser is legally required to act for the sole benefit of their clients. Those requirements would potentially force Google to break up or sell off portions of its ad business, which brought in a whopping $147 billion in 2020 — more than 80% of the company’s total revenue. In the Senate, Lee’s bill has support from antitrust committee chair Sen. Amy Klobuchar (D-MN), Sen. Richard Blumenthal (D-CT) and Sen. Chuck Grassley (R-IA), said a source with knowledge of the bill — which is still being hammered out. Lee’s office has also been in talks with Reps. David Cicilline (D-RI) and Ken Buck (R-CO) about a potential House companion bill, a House source told The Post. The Congressmen are among the most outspoken advocates in Congress of antitrust action against big tech companies. The Information first reported news of Lee’s bill on Friday. The talks with Cicilline and Buck have not been previously reported. Google and the legislators did not immediately respond to requests for comment, aside from Klobuchar’s office, which declined to comment. see also Lee first hinted at his support for a crackdown on Google’s ad business in December, when he said during a hearing that his office was working on legislation to address “conflicts of interest and competition that arise in digital advertising.” “It’s hard to me to imagine a circumstance in which one can own the exchange platform and also be a buyer, seller, broker, dealer and whatever other positions they might occupy,” Lee said during the hearing. “It’s hard for me to imagine how one firm can maintain all of those positions without something anticompetitive going on.” The idea of drawing parallels between the online ad industry and financial markets was pioneered largely by attorney and former ad executive Dina Srinivasan. Her ideas helped inspire both Lee’s forthcoming bill and the ongoing lawsuit against Google from Texas and 14 other states, which was first filed in 2020. According to the Texas suit, Google’s role as buyer, seller and middleman in the online ad market has allowed the company to charge a “monopoly tax” of 22% to 42% on each advertising transaction that’s passed onto consumers in the form of higher prices. A separate suit from over 200 newspapers filed in December alleges that Google’s grip on the ad industry has unfairly taken away ad revenue and forced them to lay off journalists. Google has denied that its ad business is a monopoly and asked a judge to dismiss the “inaccurate and inflammatory” Texas-led lawsuit. Lee’s support for a crackdown on Google’s ad business may come as a surprise to some antitrust watchers in Washington, D.C. He has not come out in support of a bill introduced by Klobuchar and Grassley that would ban companies like Amazon and Google from giving their own products a leg up in search results. The Senate judiciary committee advanced the bill earlier this month.