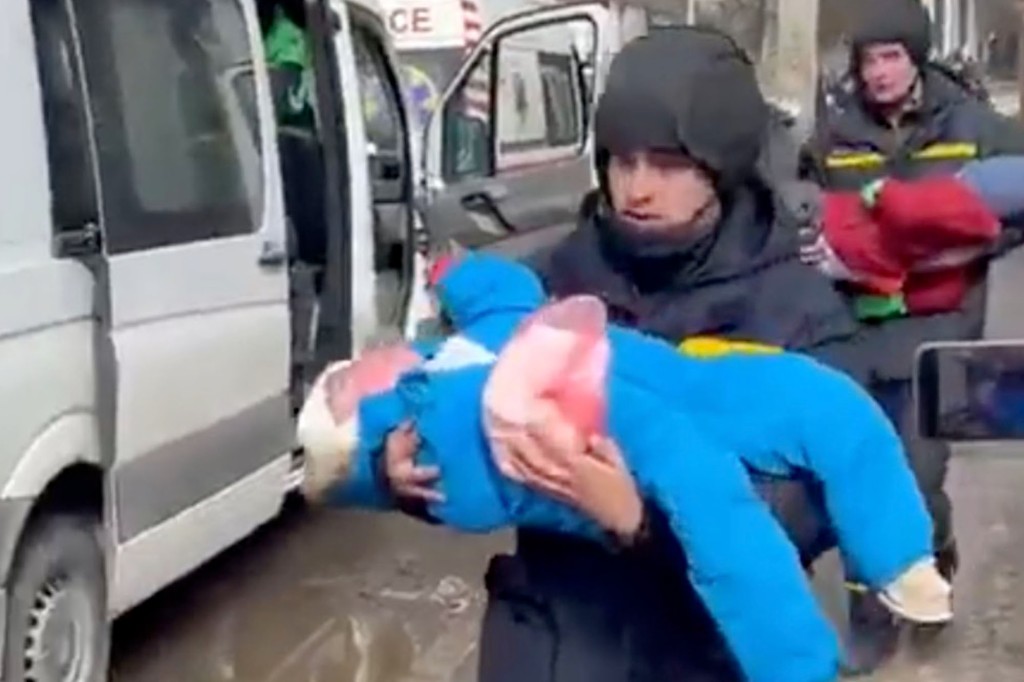 Harrowing video shows rescuers desperately helping a lifeless-looking baby in Ukraine — where officials say at least 71 children have been killed and more than 100 wounded in three weeks of Russia’s war. The clip, shared Thursday by Ukraine’s foreign minister, Dmytro Kuleba, captured the desperation as someone rushes the silent tot to a waiting Red Cross volunteer who then quickly races off. The youngster, in a blue winter bodysuit, appears to have bandages covering most of his or her head, and does not cry despite the apparent injuries. Just behind, another older-looking child is also being carried to the waiting helpers. Kuleba gave no detail with the clip — including where or when it happened — but said it highlighted Russia’s lies in trying to justify its war. “‘Denazification’. ‘Demilitarization’. These are the ‘reasons’ why Putin has sent his army to kill Ukrainians, including children,” he tweeted. “Over 70 of them already died. This aggression is a barbaric crime not seen since WWII and I swear we will ensure that each war criminal faces justice,” he promised. Ukraine’s latest tally put the number of dead children at 71, with more than 100 wounded. The UN human rights office said Friday it has also confirmed the deaths of at least 41 children — with the confirmed tally of civilians at least 549, with another 957 injured. “The actual figure could be much higher,” a spokesperson said, adding that the agency remains “gravely concerned by the rising death toll and human suffering.” “Civilians are being killed and maimed in what appear to be indiscriminate attacks … Schools, hospitals, and kindergartens have been hit — with hugely devastating consequences,” the spokesperson said. “We remind the Russian authorities that directing attacks against civilians and civilian objects, as well as so-called area bombardment in towns and villages and other forms of indiscriminate attacks, are prohibited under international law and may amount to war crimes.”