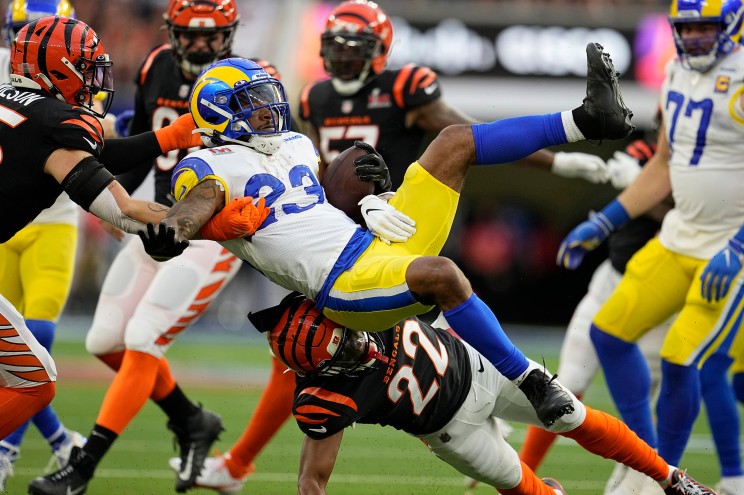 New Yorkers unleashed by the state’s legalization of mobile sports betting went all in during Super Bowl week. Residents of the Empire State wagered $472.1 million in the run-up to the big game, according to data published by the New York State Gaming Commission. The week leading up to the contest proved to be one of the most lucrative since New York approved legalized online sports betting on January 8. During the third week of January, New Yorkers placed a total of $572.5 million in bets — the highest so far. Albany is banking on mobile sports betting to generate a substantial amount of tax revenue. The state takes a 51% cut of gross revenue generated by each of the seven licensed mobile gambling vendors. Two more vendors are pending approval to begin taking bets. DraftKings, one of the vendors that was granted a license to operate in the state, said 1.7 million users of its platform placed bets on the game, which was won by the Los Angeles Rams in a thriller over the upstart Cincinnati Bengals. “That was by far the most we’ve ever had in one day and it’s not even close,” DraftKings CEO Jason Robins told Bloomberg. “I can tell you it was up, extraordinarily higher year-over-year versus last Super Bowl.” In fiscal year 2022, New York State expects to take in $249 million from taxes on gambling revnues. “Over the past month, we’ve seen how mobile sports wagering can be an economic engine for New York, driving significant funding to our schools, youth sports, and so much more,” Governor Kathy Hochul said in a statement. Across the Hudson River, New Jersey residents placed $143.7 million in bets on the Super Bowl. So far, any predictions that New York’s legalization would eat into the Garden State’s share of the mobile gambling pie have proven for naught. New Jersey residents placed a total of $1.3 billion in online sports bets in the month of January — an all-time record. Thirty states now offer legal online sports betting, though the country’s largest state in terms of population, California, does not.