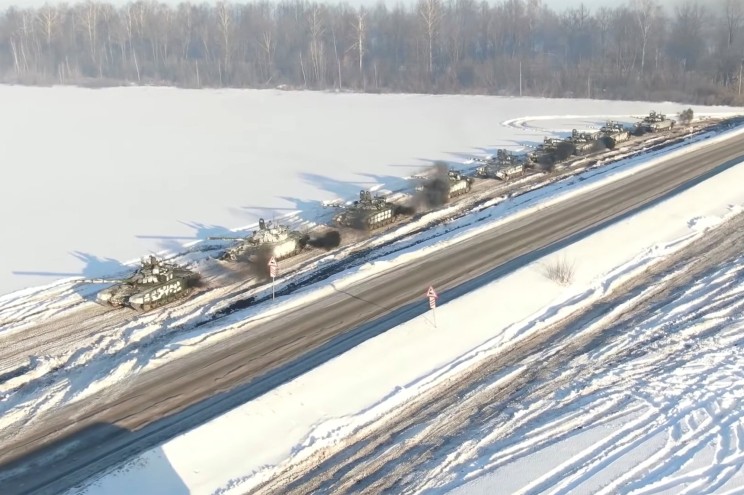 US inflation — already stuck at a 40-year high of 7.5% — could spike to 10% or higher if Russia invades Ukraine, according to a new analysis. That’s because oil prices could rise to well over $100 a barrel if Russia — a major oil producer — has its global supply lines interrupted, either by sanctions or by conflict. Pain at the pump could ripple across the entire US economy, according to the analysis, sending prices sharply higher on everything from gas to groceries. The study, which was done by consulting firm RSM and reported by CNN, found that a crisis in Eastern Europe would trigger the fastest rate of US inflation since October 1981. Oil prices alone could rise to $110 or beyond from their current level of just above $90. “We’re talking about a real short-term shock,” Joe Brusuelas, chief economist at RMS, told CNN. “Heating the home and putting gasoline in the car will become more expensive in the immediate aftermath of a Russian invasion,” he said of a possible incursion. Russia is the world’s second-largest exporter of both oil and natural gas. Meanwhile, President Biden has vowed that any Russian military incursion into Ukraine would result in “swift and severe” sanctions against Moscow. American and European officials fear that any sanctions against Russian financial institutions would result in retaliation from the Kremlin, including cutting off the supply of oil and natural gas from Russia to Europe — which could crimp supplies and send prices spiraling higher. Last week, analysts at JPMorgan Chase predicted that a Russia-Ukraine crisis would send oil prices even higher than the RMS analysis predicted — to around $120 per barrel. Americans are already paying sky-high prices at the pump thanks to record levels of inflation not seen in 40 years. The national average for regular gasoline hit $3.50 a gallon on Tuesday — up from around $2.50 a year ago, according to AAA. And consumer prices have surged 7.5% from the last year — forcing the average American household to fork over an extra $276 per month, according to a study by Moody’s Analytics. The latest spike, which outstripped the 7.2% increase predicted by economists, marked the highest annual increase for consumer prices since February 1982, the Labor Department said last week. Increases in the cost of food, electricity and rent were among the largest contributors to the red-hot rate — though excluding food and gas, the Consumer Price Index rose by 6%. The inflation rate in the US averaged 3.25% from 1914 until the present year. In 2020, inflation rose by just 1.2%. The previous year, inflation was at 1.8%. Geopolitical tensions have remained high in recent weeks after Russian forces massed on its border with Ukraine — prompting American intelligence officials to warn of an imminent invasion. But there were signs that the crisis was being averted — at least for the time being. Russian President Vladimir Putin said Tuesday that he would seek more dialogue with the US and NATO — this after his military pulled back some troops from the region. As signs of a de-escalation emerged, crude oil retreated to just under $92 per barrel on Tuesday.