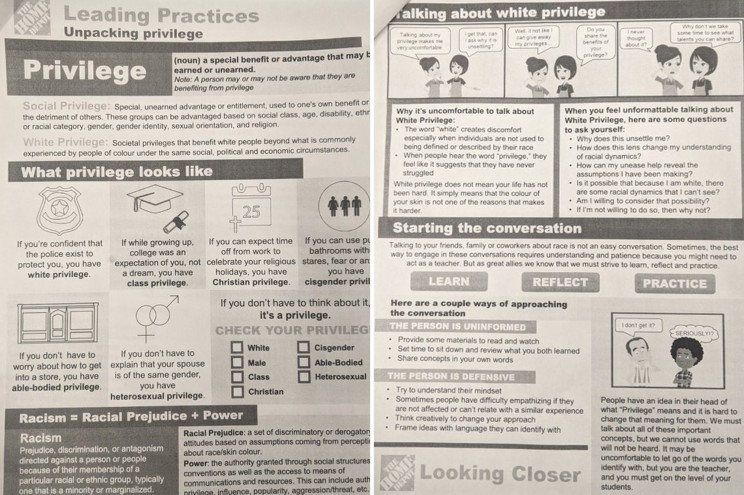 A Canadian branch of Home Depot sparked outrage after it posted a notice to employees about the benefits of ‘white privilege” and included a checklist for those who are “white, male, Christian, cisgender, able-bodied, and heterosexual.” The notice, which is titled “Leading Practices — Unpacking privilege,” was posted in an employee lounge at a Home Depot in Calgary, Alberta. A spokeswoman from Home Depot’s US headquarters confirmed to The Post that the white privilege notice was material from its Canadian division. She said it hadn’t been approved by the company’s diversity and inclusion department. The flyer had a Home Depot logo at the top. The Canadian staffers who were apparently given the learning material were encouraged to acknowledge “societal privileges that benefit white people beyond what is commonly experienced by people of colour under the same social, political, and economic circumstances.” Workers at the Home Depot branch were also urged to discuss their “white privilege” while being told that “the word ‘white’ creates discomfort — especially when individuals are not used to being defined or described by their race.” Hoping to celebrate Christmas? The flyer says: “If you can expect time off from work to celebrate your religious holidays, you have Christian privilege.” From a friend that works at Home Depot, this is the kind of crap on display in the lunchroom pic.twitter.com/pFd0IkKlbY— LLB (@LLB24693515) March 21, 2022 Staffers were also told in the notice that “if you’re confident the police exist to protect you, you have white privilege.” People were asked to check a box determining what “privileges” they had. The choices were: white, male, class, Christian, cisgender, able-bodied and heterosexual. It’s not clear if the packet of information was simply informational, or if it was part of a group learning exercise — or if Canadian employees had to actually fill out the privilege forms and turn them into management. The US spokeswoman for Home Depot told The Post that the information was not officially sanctioned as “part of any required companywide training.” The spokeswoman didn’t immediately say whether the information had been discontinued in its Canadian division. Some of the packets privilege warnings: · “If while growing up, college was an expectation of you, not a dream, you have class privilege.” · “If you can use public bathrooms without stares, fear or anxiety, you have cisgender privilege.” · “If you don’t have to worry about how to get into a store, you have able-bodied privilege.” · “If you don’t have to explain that your spouse is of the same gender, you have heterosexual privilege.” The company does not require that the content of the notice be taught as part of its diversity and inclusion initiative, a source familiar with the matter told The Post. Some conservatives and free speech advocates have denounced attempts by companies and colleges to impose “woke” indoctrination. “Imagine how messed up people have to be before a major corporation decides to post this and their break room,” one user said on Twitter. Still, others said they thought it was “amazing” Home Depot was addressing white privilege and other issues.