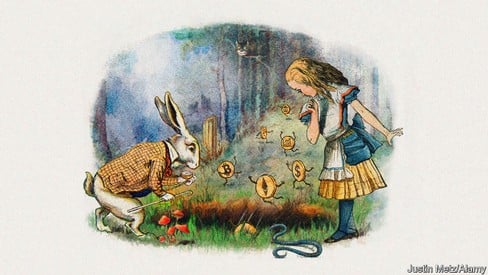 The sale raised nearly $422,000 for charity IN SEPTEMBER our “Alice in Wonderland” themed cover sent Alice down the rabbit hole, into the weird world of non-fungible tokens (NFTs), cryptocurrencies and blockchains. The new technology, the accompanying story argued, contained promise for all sorts of digital and financial activities. To grasp it better, we resolved to follow Alice down the rabbit hole. On October 25th we began an auction of an NFT of that cover. Just over a day later, after a flurry of late bids, the auction closed. It had raised 99.9 ether, equivalent to nearly $422,000 (see chart). The winning bid, less fees, transaction costs and potential tax liabilities, will be donated to The Economist Educational Foundation, an independent charity that teaches young people to analyse current affairs. It turns out that the cover’s description of this new world was bang-on. We asked @9x9x9, the alias of the successful bidder, to comment after the sale. They began trading and collecting NFTs almost three months ago, spending many hours a day researching and buying different tokens. One of the main reasons they bought the cover, which seeks to capture the sense of adventure and novelty of this world, was the aptness of the phrase “Down the rabbit hole”. The market for NFTs, which are records of digital media on a blockchain, is burgeoning. Last year it was worth just $340m. In August the total value of NFTs held on the Ethereum blockchain was in the region of $14bn, according to DappRadar, a research firm. The use of the tokens, already evolving, could expand well beyond collectables, into the realm of high finance. We will have more to say on the potential of this new technology, and how easily it can be applied to activities in the real world, in the coming days. In the meantime, delve into the coverage of our journey so far. The market for non-fungible tokens is evolving Why are we selling our cover as an NFT?