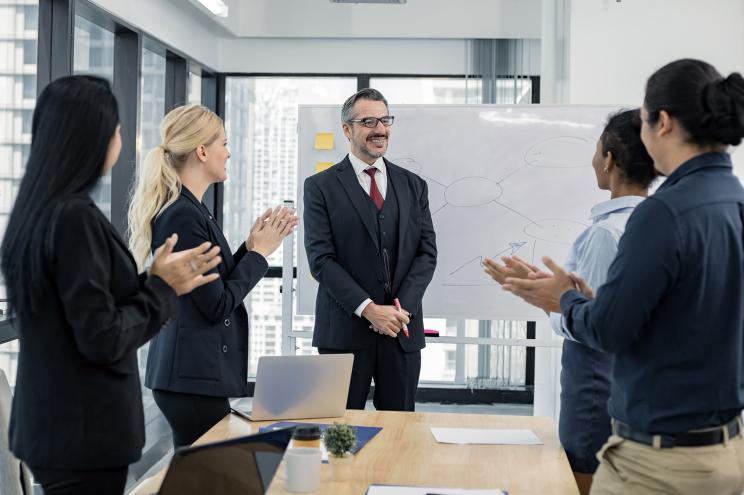 Do you know someone who is insensitive and name drops? Worse, is he or she your boss? These are two of several telltale signs that your leader could be a narcissist. And not only is having a narcissistic superior potentially bad for employees, a new study shows that this could be bad for businesses as well: This type of boss can hinder communication and cooperation within organizations, according to Science Daily. And yet, studies have shown that those who display narcissistic traits are more likely to be top executives. “These individuals believe they have superior confidence, intelligence and judgment, and will pursue any opportunity to reinforce those inflated self-views and gain admiration,” Science Daily reported. Because of this supposed superiority, they can impede information flow within organizations, according to new research from the University of Washington that was published in the Strategic Management Journal. Below are the red flags to look for: They take all the credit Narcissistic bosses tend to pillage and purloin ideas and credit. “A toxic manager will always boast about their achievements and the power they possess within the company. They always want to appear important to other people and take credit for the work done by top talents,” Harriet Chan, cofounder and marketing director at CocoFinder, told Forbes. Or they grudging give you the glory for your work. “They act as if offering recognition would diminish the narcissist’s own star power. When they do give credit, it’s usually under the context of his or her brilliant leadership, and to advance his ambitious agendas further,” according to Psychology Today. They love to name drop These managers like to “constantly appear important, with a blown-up and exaggerated sense of themselves” by “having the the habit of name and status dropping.” Another way to identify them is the way they adorn and decorate their desks and offices, which is often a temple to themselves and their accomplishments, Psychology Today noted. They monopolize attention How a boss acts in meetings, conferences, calls and via email is another signal: narcissists tend to command attention. Not only are they spotlight hogs, their domineering behavior also hampers others from speaking up and sharing knowledge. “Narcissism affects people’s desire to be distinctive,” said study co-author Abhinav Gupta, associate professor of management in the University of Washington’s Foster School of Business. “It’s correlated by people wanting glory for themselves. We hypothesized that business-unit heads that have those traits would be the ones to say, ‘We don’t want to work with you. We have sufficient skills and knowledge and abilities that we will work independently.’ That was very strongly borne out based on our research design.” They’re indifferent to underlings Their employee’s needs are also beneath their concern, according to Psychology Today. “Whether you’re over-stretched with work issues, feeling ill, or just having a bad day, you’re basically treated with a: ‘So what!? This is not my problem – You deal with it.’ attitude.” They take advantage of employees see also Then there is “The Devil Wears Prada” stance of servitude that includes, according to Psychology Today, having employees “running personal errands, taking on inappropriate chores, working on pet-projects, or assuming part of her responsibilities, all without appropriate compensation or acknowledgment.” Because they do not have respect for others and their time, according to Forbes, they tend to be micromanagers. This can disempower “employees to work autonomously” and “make decisions independently or think creatively.” They like to shift blame Taking short cuts and the lack of following ethical standards can indicate that your direct superior could be a narcissist. They also cannot handle criticism or negative feedback and look to shift blame to others when things go awry. Tyler Garns, CEO at Box Out Marketing, told Forbes that because of their mindset of being the best, if there are “errors are happening, it’s the team that’s incompetent.” They throw tantrums Lastly, a boss that spews and spreads negative emotions, throws tantrum or is emotionally abusive can be another indication. Psychology Today noted that “by making you feel inferior, they boost their fragile ego, and feel better about themselves.”