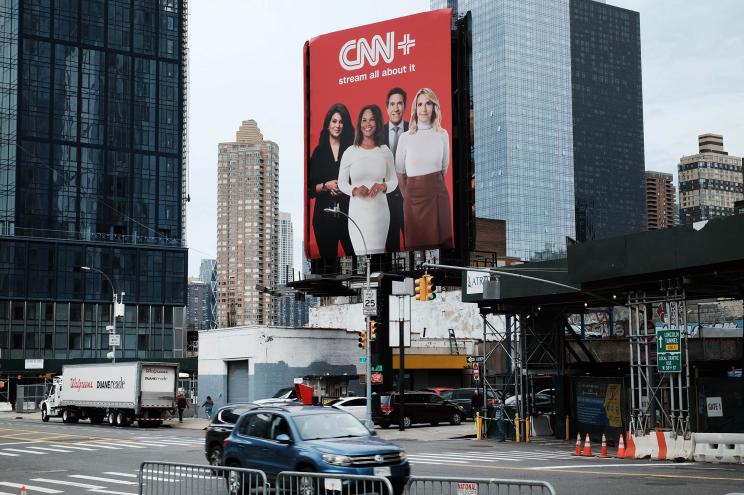 CNN+ was doomed before it had a chance thanks to bad timing and a fundamental disagreement over strategy between previous management and the new corporate parent that was formed after a recent multi-billion dollar merger, according to a report. The cable news network’s fledgling streaming service will cease broadcasting at the end of this week following a decision by Warner Bros. Discovery to shut down all operations less than a month after its official launch. “This is a uniquely sh-tty situation,” newly installed CNN President Chris Licht told some 400 employees at the network’s New York City offices on Thursday when he announced the closure of CNN+. According to CNBC, the streaming service died in its infancy because Warner Bros. Discovery CEO David Zaslav thought it was pointless to offer a standalone news channel that people had to pay for when they could get the same content for free. Zaslav took the reins of CNN and the other media entities in WarnerMedia’s portfolio after parent company AT&T decided to spin off the division and merge it with Discovery Communications. The deal was first announced in May of last year. CNN+ was the brainchild of previous CNN boss Jeff Zucker and his deputy, Andrew Morse, who was head of CNN’s global digital division. Zucker’s original plan was to launch CNN+ in January — giving the streaming service a three-month head start before Zaslav took over. But technical difficulties kept delaying the launch and federal regulators approved the merger sooner than anticipated. Zucker wanted to launch CNN+ at the end of March, but he never got the opportunity to see his final product get off the ground because he resigned in early February after his years-long relationship with chief marketing officer Allison Gollust became public. Gollust, a former aide to ex-New York Gov. Andrew Cuomo, would resign weeks later after her position within the company became untenable. Sources told CNBC that Gollust’s absence hurt the network’s marketing efforts in promoting the new product, which may have led to underwhelming subscriber numbers. Zucker and Morse, who announced he would be leaving CNN after the demise of CNN+, also had no way of knowing that Zaslav would never be on board with the idea of a standalone streaming service. Because of strict antitrust regulations, there was no legal way for Discovery executives to communicate their position to WarnerMedia and CNN before the $43 billion merger was made official earlier this month. Zaslav also had a competing vision for his company’s streaming offerings. Instead of investing large sums of money in niche programming like CNN+, he wanted to bundle the new company’s content into one large package that would include Discovery, sports, and news. The two men conceived of the idea in early 2020. Soon afterward, Jason Kilar assumed the role of CEO of WarnerMedia, which was CNN’s parent company. The three men devised a strategy which envisioned CNN+ as the streaming equivalent to subscription news services like The New York Times. But Zaslav didn’t think it was an apt comparison. He reportedly viewed CNN+ as more in the mold of Fox Nation, the streaming companion of CNN’s rival the Fox News Channel. In Zaslav’s view, it would make more sense to fold CNN into an all-encompassing streaming package that combines HBO Max, Discovery+, and the company’s other media properties.